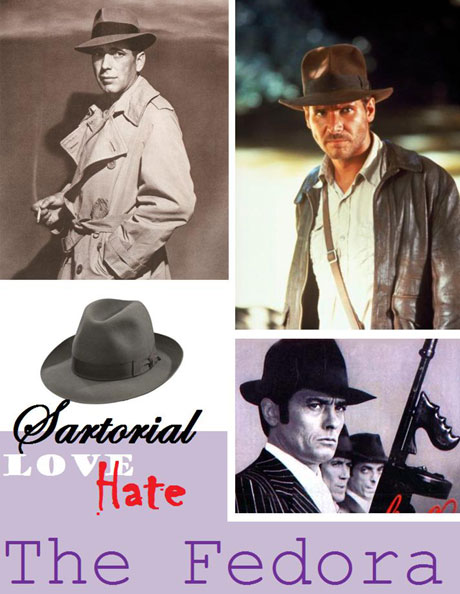 I adore hats. I have quite a few of them but nowhere near the number I should like to own. For my next purchase, I am rather taken with the idea of a Homburg.

I haven’t always liked headgear. It is only due to recent maturation that I have taken to hat-aspiration. It was very hard to get excited about the kind of headwear that dominated the school and varsity scene; if it was a particularly chilly day, you wore a beanie. And despite the physical pleasure in wearing a head-warmer of this style, it is an amateurish design. No matter how luxurious brands like Burberry Prorsum upgrade the beanie to some vicuna-cashmere, hand-knitted deluxe tea-cosy, it will always be a beanie – no milliner worth their salt would acknowledge it as anything else.

The advantage of a beanie is that no one seems to find it particularly distracting or conspicuous. It barely alters the day’s ensemble; the silhouette remains the same. It is favoured by gentlemen of many a generation, chiefly because it is a cheap, effective and unobtrusive method of keeping warm. The problem? Well, it’s not exactly elegant. It doesn’t have the presence that other headgear offers; the rakish brims, the altered silhouettes. It is, by comparison, disappointingly anonymous.

A fedora, by way of contrast, is precisely the opposite. So noticeable are fedoras, hats that were worn by nearly every metropolitan gentleman just over half a century ago, that when I saw a fedora-wearing gentleman walking towards me on St James’ Street, more than six pairs of John Bull eyes turned and scrutinized the wearer. A gentleman no longer needs to wear an unusual hat to attract attention – he simply needs to wear a hat.

The fedora was a popular item of headgear in the early twentieth century, firstly for women and latterly for middle-of-the-road men. It was ubiquitous; on streets, in cinemas, on tradesmen, lawyers, screen stars and sportsmen. By the end of the 1950s, it was rarely seen as the fashion moved towards hats with smaller brims (for example, the trilby) to complement the clothing styles. By the mid-sixties, the writing was on the wall; JFK had been the first president not to wear a hat on distinctly ‘hat’ occasions and living with headgear had become not only unfashionable but undesirable. The only men still wearing fedoras into the late 60s and early 70s were of an older generation.

Those who wear fedoras love them but they can receive very different responses from others. When I wore a black fedora with a double-breasted jacket earlier on this year, one of the more pleasant responses I received was ‘Ahh, nice hat mate but…you don’t really need to wear one though? I mean, you’re still young.’ Other responses rhymed with ‘banker’, ‘glosser’ and ‘grass-mole’ and it made me consider that there are still plenty of people who are unwilling to allow the fedora to make any kind of renaissance.

I tend not to wear mine very much, which I greatly regret, due to it being such a ‘statement’ hat; it has nothing on my silk top hat or straw boater but, bizarrely, in their own context those models are apparently more tolerable – every mucker, irrespective of class or generation, wears a topper and boater to Ascot and Henley. The ‘statement’ about the hat is that it is an everyday item and that, if I chose to, I could wear it everyday as many millions of men before me once did.

As such, my fedora – a present from a dear relative who admired and cheered my interest in old fashions – sits on my shelf; dusty and rather sad; an unfortunate victim of sartorial love/hate.