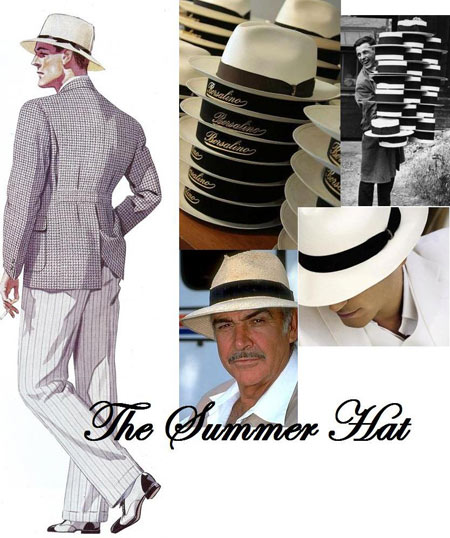 As much a part of summer as cocktails on the lawn, afternoon walks in the shade of the trees and sandy slumbers on the shore, the summer hat is an object of reassuring majesty. For what is chiefly a season of disrobing; a period in which we dress sparingly to preserve comfort, the hat can be an accessory of practical elegance.

When the sun beats down brutally, and there are few moments of respite from such oppressive heat, the hat is by far the best thing to wear. Sun umbrellas, though certainly elegant and fit for a lady, are not the sort of thing for the beau boulevardier; they are apparatus, awkward and contrived. The only serious thing to guard against sunstroke, sunburn and unattractive squinting is a good hat with a generous brim.

Though hats are certainly much more popular in the summer months, undoubtedly for the reasons I have advanced, they are still rarely seen. For some, there is an uncomfortable stigma to wearing a proper hat; it is an event, a special occurrence: “Should I wear the new panama today? It’s a bit showy”; “Don’t wear your hat; we’re only going to my mother’s.” This sense of preservation and ceremony only really serves to keep the poor old hat, and please excuse the droll pun, in the shade.

Hat wearers are almost seen as eccentrics; as though the wisdom in donning one has long been exposed as superstition and antiquated irrationality. The remarkable thing about a hat such as a summer Borsalino is how much more grace and finish it provides to the wearer. It’s the coronet to the robes of glory; and a sensible summer essential.

I think the question of ‘which hat?’ is a tricky one. For one thing, hats can look magnificent on the shelf, and indeed on others, but they can look utterly wrong when you perch them on top of your own head. The reason for this is that hats are very distinctive; the way they appeal to you in form and shape, objectively, might not be concurrent with the effect you eventually produce.

Therefore, it is important to try a good many hats on – for sizing and styling reasons. One man might have a romantic notion of owning a panama of a certain shape, but he might find that another shape or style suits him much better. I too have experienced disappointment with a style of hat that has appealed to me from the pages of a book or the perfectly formed window displays.

It is very difficult to look good in all styles of hat, so it is best to accept your fortune when you find it; wider brims are better for those with wider faces and narrower brims, like pork pie hats, generally, look better with slimmer faces. Similarly, wide brim hats worn by those with narrow faces and shoulders tend to look a little odd, drowning the man and making him look rather juvenile and green.

Another important consideration is that, though Borsalino, Christys and Lock & Co make fabulous hats of outstanding quality, stylish and well-made hats can be picked up in less intimidating emporia. And if you discover a hat with a glorious shape and an excellent fit, do not despair if the band is of poor quality or unappealing; haberdashery stores sell good quality grosgrain ribbon and silk that can be fashioned into smart bands for hats very easily and inexpensively by a local tailor.

There are so many types of light summer hat available in classic and contemporary styles and colours and the examples of hat examined below will not appeal to everyone; however they are distinct enough to merit individual discussion. 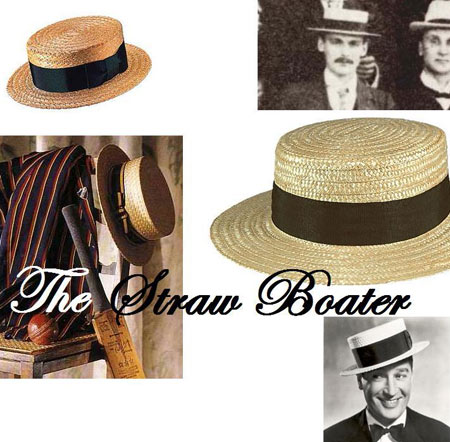 First up for examination is the straw boater. The Henley classic, the boater is a style of hat rarely seen. It has a flat top and a flat brim and is made from a thick straw. To some it looks a little dated; the heyday for this youthful creation was the early half of the 20th century and since then it has been relegated to ‘ceremonial’ wear at regattas, Harrow School and by barbershop singers.

It would take a brave and rather dandy-ish chap to adopt the boater for non-ceremonious occasions. Perhaps a man who favours the elegant clothing of the high-collared Edwardians would consider this a serious piece of headgear; it is a little out of sync with modern fashions.

Having said that it is a very natty design and a proper boater will have a large enough brim to keep you cool on rather too sunny a day. And if you are off to the polo, or the racetrack, the tennis championships or even a wedding, a boater is an excellent item to wear. The best way to wear it is a little jauntily in the spirit of Maurice Chevalier; a little smile and a good deal of bonhomie are the best accessories. 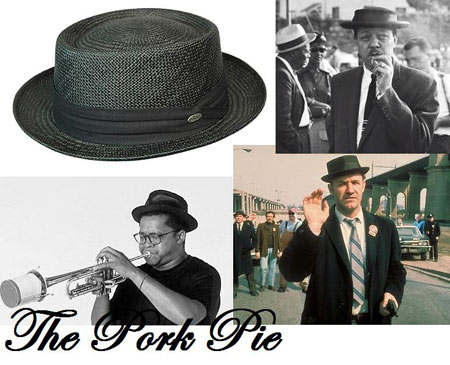 The ‘porky’ has experienced something of a renaissance recently. It was one of the designs that seemed to match so very well the avant garde collections of Dior Homme. It was famously worn by jazz musicians of the 1950s and ever since it has had those connotations.

Jude Law wore one as jazz-loving Dickie Greenleaf in The Talented Mr Ripley and Pete Doherty, though not exactly a jazz fiend himself has often worn one in the same cocksure manner.

Though some wear the pork pie hat like a boater, and others flat across the head, one of the most charming methods is to push the hat back on the head like an errant schoolboy, exposing your forehead and some locks of hair. This does, however, have the disadvantage of exposing your face to the sun. 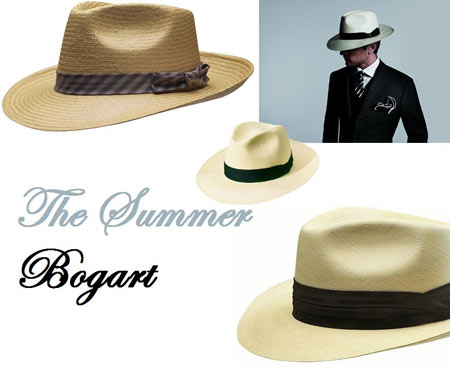 The summer ‘Bogart’ is rather a generalist term for any hat that happens to look rather Bogart-esque; like the summer version of something from one of his classic gumshoe films. Panamas would count in this category, particularly the Monte Cristi wide brims, Savannahs and Trilbies.

This is the grandest and particularly the most user-friendly of the summer hats available to gentlemen. The Trilby is a little less grand than the wide brim, which in certain tones like berry red and black almost looks like an elegant cavalier chapeau; sans feather of course.

The ‘folders’ – panamas that fold up, suitable for travel – are certainly practical but their conservative shape would probably appeal more to older men.

The Savannah has a flatter brim and though created as a hat for gentlemen has good popularity among women but the timeless colonial design still looks marvellous on gentlemen of all ages. This style of hat is appropriate with anything from casual cardigans and shorts to three-piece linen suits. I wear a wide brim slightly cocked to the side for a little brushstroke of ‘character.’