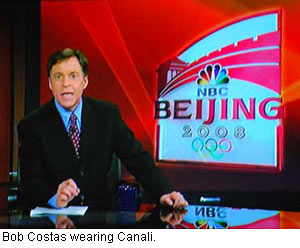 In its August 11, 2008, press release, Canali announced that it has partnered with NBC Sports to outfit the on-camera personalities for coverage of the 2008 Beijing Olympics.  The Canali / NBC partnership was the initiative by the Olympic Primetime host Bob Costas.  As part of the sponsorship, NBC personalities each received several complete outfits including custom made suits, sportswear, and accessories, and will wear Canali for the entirety of the three weeks of Olympics coverage.  “We are proud and excited to have been selected by NBC Sports and the Olympic Games,” said Elisabetta Canali, Global Director of Communications. “We worked closely with NBC and each Olympic broadcast anchor to find the right fabrics and styles that would make them feel comfortable and pleasing to the eye.”

Watching the U.S. Olympic coverage, I cannot help but think how uninspiring the NBC sportscasters look.  Bob Costas’ outfits, in particular, are incredibly dull.  Black suit, blue shirt, red tie or black suit, white shirt, and black tie with white stripes.  How boring.  The jacket fit also leaves much to be desired as evidenced by a  piece of loose fabric on the back when Mr. Costas is sitting.  On the other end of the spectrum is the gymnastics commentator Bela Karolyi who, flamboyantly yet catastrophically, tries to match gingham shirts, odd colored blazers and solid ties.  This leads me to the following question: did Canali provide these men with any guidance on fit, color and pattern matching before allowing them to put the clothes on?  Arguably, even Cesare Attolini provided outfit would look like a mess without proper fit and guidance.

Another minor flaw, although this is more of my personal quirk and probably why I don’t own any Canali suits, is because I am a huge fan of a soft Neapolitan shoulder.  Canali jackets, on the other hand, are too structured for my liking, and the shoulders, in particular, look too boxy.  But I digress.

While I find Canali to be a good maker of mid-upper level Italian clothing, I think the label is trying to become another Armani by its latest attempts to gain popularity in the mainstream media (in 2007, the label provided George Clooney’s suits in Michael Clayton).  Could this trend potentially lose Canali some appeal with the more discerning buyer?  I am not sure.  Whatever Canali decides to do, however, I  hope it does not follow the Armani formula by charging ludicrous premiums on mediocre articles of clothing.  And if it does, so be it; there is always Corneliani, which is as good, if not better.