Jeans With A Blazer 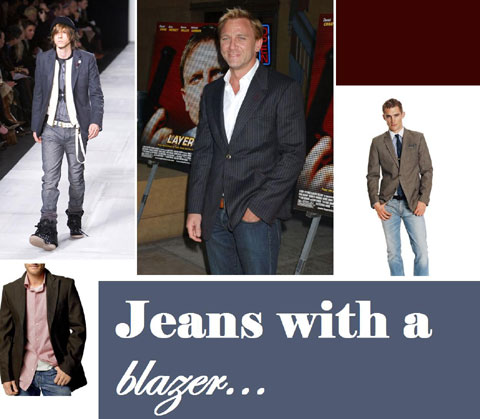 A cousin of mine once descended the stairs at the student house in which he lived to smirks and guffaws from his friends who had been impatiently awaiting his arrival, regularly yelling at full, ear splitting volume. They stood confidently, arms folded at the bottom of the stairs; “What the hell is that?” one of them exclaimed. It was not an awkward stain, a rogue dash of unworked hair gel, an unzipped fly or any other form of unintentional embarrassment. And it was not a lack of coordination that so tickled them; it was more the particular coordination he had chosen. “Jeans and a blazer!” they chanted in a mocking, hooligan fashion as they followed behind us in the street. Banter for sure, and my cousin was sufficiently unmoved for it to remain as harmless as that, but it’s remarkable how things change.

I saw recently one of the friends just north of Mayfair on one of my recent button-finding expeditions. Had it not been for my good recollection of faces, I might have missed him, for there he was, pacing down the street as happy as a clam in what else? Jeans and a blazer. I remarked to him that it was an interesting choice of outfit, considering the dislike for the combination he exhibited some years ago. He avoided a response very well, but there was no possible excuse; years ago, he had mocked the very idea of it (and there are many who still would) but now, the combination is everywhere. He, naturally, has fallen for peer pressure once more. It happens, of course, there is no doubt about it – “Don’t laugh, you’ll be wearing it soon” is a weary line, so frequently used but with good reason: men particularly have a tendency to ‘keep in line.’

The horror about ‘jeans and a blazer’ is that they are frequently worn so badly. Think what you like about the appropriateness of the blend, if it must be done it must surely be done well. Boot cut, grungy and baggy jeans with torn bottoms are a disastrous start. The number of times I have seen perky, cocksure young chaps in a smart jacket and such awful jeans cannot be counted; the combination needs help and such a careless approach needs banishment. Jeans are not there to drag the jacket to their level, jeans should be as the long-misbehaving best man at the wedding; improved for the occasion. They shouldn’t act as ‘mock trousers’ – a pair of jeans should always be a pair of jeans, but they should not contradict the aesthetic of the jacket.
And mocking doesn’t always produce the best results. Some of the best J&B combinations I have seen involved jeans of a washed, light blue denim that most would shun in favour of darker supposedly more ‘sophisticated’ hues.

The most important thing, in my opinion, is that the jeans must be balanced; neither rigid nor sloppy. The ‘balanced fit’ comes from a pair of jeans that correspond to the wearers preferred tightness and length but that are ever so lightly restrained in this regard due to the presence of the jacket. Leaving folds and folds of denim at the bottom looks wrong. From the picture above, I guessed that Daniel Craig’s combination probably ends said ugly folds and even clumpy shoes, whereas the ideal ‘finish’ to the jeans would be a relatively narrow leg and youthful slip-ons. The length should be somewhere between that of a smart trouser and that of a more casual pair of jeans. I prefer jeans to be unrumpled at the bottom, but sometimes with a jacket they look rather too trouser-like and I tend to leave a small amount of contrived ‘turn up’ to distinguish them as jeans. The other option that works wonderfully well is to wear jeans that hang well above the shoe, exposing ankle. This works best if one wears loafers (the lower profile is more flattering) and if one goes sockless. Straight fit jeans are probably the best choice.

Likewise, the jacket must not conflict with the denim. If jeans are preferred to be worn lower than the waist, shorter jackets should be shunned; the excess jean material and off-buttock pockets look awkward. Also, jackets with that particular suit ‘sheen’ look entirely out of place unless they happen to be counteracted with considerable accessorising skill. Navy, charcoal and browns in matt cottons and wool work best as companions to denim.