One of the most pleasant ideas of buying clothing and accessories is that, after they have ceased to be useful for the purchaser, they find renewed purpose with another. We all know the Patek Philippe story about not actually owning something but simply looking after it for the next generation; it’s marketing bumf, certainly, but there is something enduringly appealing about being able to pass down something of style and value. After all, a product that lives two, three or four lives is of far greater physical and emotional value than a product that fails to live but one.

As corny as it seems, being able to pass something on is not only beneficial for the giver but also the receiver. In many cases, these valuable keepsakes are all we have to remind us of those who have passed on. History is littered with tales of possessions as remembrance. Vincent Astor, whose father John Jacob died in the Titanic tragedy, famously carried his father’s gold pocket watch – which he had worn at the time of the sinking – for the rest of his life. The hackneyed “it was my father’s and his father’s before him” line might have us groaning in the aisles but there is meaning beyond the sentiment.

I recently escaped London to visit my parents. After a pleasant, late-summer weekend in the countryside, I returned to the Smoke with some remembrances of my own; a lovely old Gieves & Hawkes Argyle sweatshirt and a fantastic navy, double-breasted wool overcoat from the now-defunct Studd & Millington, a tailor and overcoat specialist formerly of Conduit Street. Bought in 1983 for £180, my father wore it on his winter commutes to insurance offices in the City. Now, nearly as old as I am, it is about to embark on its second life. No one could have envisaged that the fragile infant he left each morning would grow up to wear the same coat in which he waved his daily goodbyes. 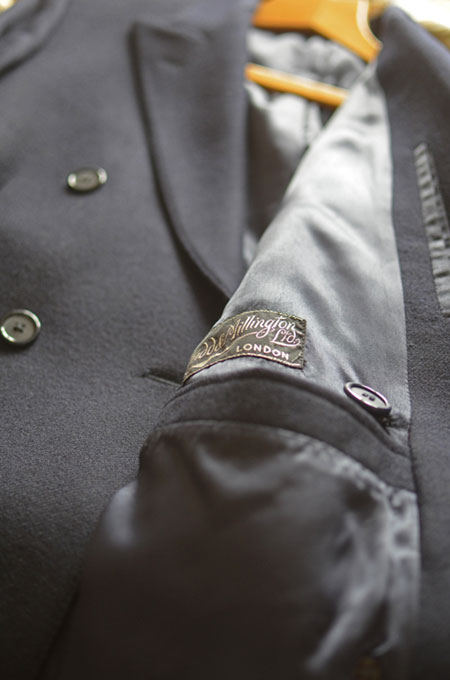 The marvellous thing about the coat is that it doesn’t look 30 years old. It has a beautiful, military cut with peaked lapels and a weight that is uncommon in even the highest standard of modern overcoat. Its length, though unfashionable, is entirely to my taste; though made in the 1980s, it could easily be from the 1920s. Beyond the appealing aesthetics, it also has a value that no newly-bought or vintage-shop-find coat could ever have. As I walk the streets of the Square Mile this winter, I will be wearing something that the ancient walls of the City have seen before, nearly three decades ago. I know exactly where it has been and, more importantly, I am the successor to the man who first wore it.