I find it incredible how small and insignificant things can produce polar and often extreme responses. A jar of Marmite or a liquorice log might have one person salivating whilst another begins to retch; there is, very often, little middle ground. For these two famous comestibles, most people will stake their allegiance to one side of the battlefield; they are classic examples of things to love or loathe.

I have discovered, in my social circle, there is a similar response to various items of clothing that I have worn. One friend points in revulsion whilst another states their admiration – neutrality in relation to a few of these items or styles is not often expressed. The first ‘style’ of discussion which I find has provoked such strong sentiment from those of my acquaintance is the style of ‘tone on tone.’

Tone on tone is perceived as quite a modern style: eschewing the classicism of contrast in ties and shirts, jackets and waistcoats. In fact, the truth is that tone on tone has been done many times before and centuries before this one. White tie and tails, the evening formal wear of yesteryear, is a fine example.

Though the chap wears a black tailcoat and trousers, his waistcoat, shirt and bow tie are all white. And, in turn, this all-white ‘bib’ echoes the evening dress of the late 18th and early 19th century when men wore white neckties with white shirts and white, or perhaps even ivory, waistcoats; the fun to be had was through the use of different materials of different textures or patterns.

Since the mid 20th century, when black tie replaced white tie as ‘formal’ evening wear, wearing contrasting colours has been favoured and it became the classic standard. 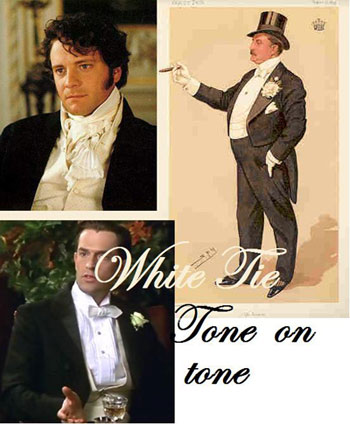 When tone on tone became popular again in the late 1990s, it looked mightily refreshing. Shirts and ties looked youthful once more; the ‘smart’ look became heliotrope shirts and ties, together in harmony. However, whilst it was certainly done well in a few cases, it was also done very badly indeed.

I remember the early programming of ‘Who Wants to be a Millionaire’ when Chris Tarrant wore ghastly combinations of silver on silver and bright blue on bright blue – it was a look that became synonymous with tacky game show hosts.

‘Chavs’ began to wear the tone on tone look to weddings and evening functions; both shirt and tie exhibiting a terrible glossiness. This was the final nail in the proverbial coffin. To tone on tone they had ‘done a Burberry’ and this is perhaps why many of my friends do not like the style. 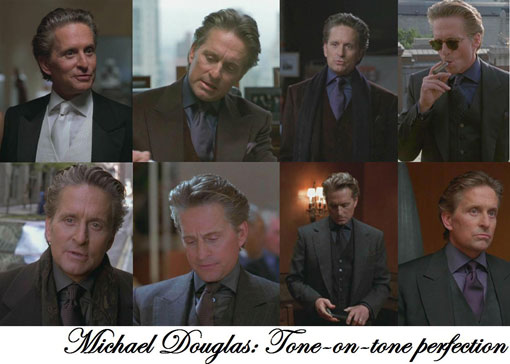 However, for my other acquaintances, capable of seeing the merits of tonally identical layering, there have been high points. In the 1998 film ‘A Perfect Murder’, Michael Douglas wore numerous combinations of tone on tone and this is a perfect showcase to illustrate the importance of texture when combining colours from the same hue pool.

The evening waistcoat is of patterned silk in contrast to the plain tie and shirt, echoing the fashion of the mid to late Victorian period when men tended to allow their waistcoats to be the most extravagant and elegant part of their dress. Some suede was used in the manufacture of the waistcoats for Douglas which, texture wise, contrasts dramatically against the shine of the woven ties and silk shirts.

The other important thing to note is that this particular exhibition of the look concentrates on piling together tones from the same stretch of hues rather than putting exactly the same colour on top of each other. This makes tone on tone much more fun, and also, more aesthetically pleasing.