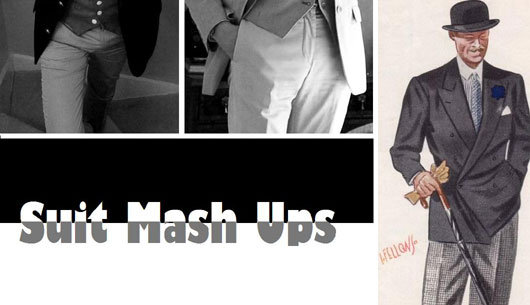 It’s inevitable that a child, quite demonstrably informed by an adult not to do ‘something’, will eventually do ‘something.’ It should also come as no surprise that another adult, demonstrably informed by another adult not to do something, will rekindle that childlike curiosity and reaction to authority by doing the very thing they had been instructed not to do. Temptation wields a mighty force. For centuries, man has always sought to place his hand on Eden’s apple. I was told by my parents not to do many things, some of which I hadn’t even thought of myself. Their introduction, and apparent damnation in the eyes of people who had great authority over me, sparked something; ‘if it’s bad, it must be good for me’ I muttered to myself many a time in my rebellious youth.

I once visited a tailor who looked at me up and down, frowned and asked me where I got my clothing from. After informing him, he said; ‘Oh, so this is actually two suits? You’re wearing one suit’s trousers, with another suit’s jacket?’ Shrugging my shoulders in admittance, he shook his head with knowing disdain; ‘Shouldn’t mess around with your suits. Wear the matching trousers; don’t mess around trying to mix it up.’

I have always remembered his words, although I have never heeded them. I informed him coolly that contrasting trousers with jackets is actually an old phenomenon and that I liked the distinction between a lighter pair of trousers and a dark jacket, and vice versa. He informed me that only blazers should be worn with contrasting trousers, everything else should match.

As claustrophobic and unattractive a viewpoint to me as it was, it did educate me that some people disapprove of suit ‘mash ups’ – mixing trousers with jackets, wearing jackets with odd trousers and vice versa. Such people might look down upon a chap who finds, in the words of an acquaintance, ‘too much utility’ for a single suit. This sartorial sneering doesn’t really bother me as most of the fun in buying a suit is not rejoicing in its possibilities as a predictable one-piece but dreaming of the possibilities for experimentation – with a seersucker jacket in the summer, a velvet jacket in the winter, a cardigan or even a pair of jeans.

My light grey Prince of Wales check suit, for example, offers great possibilities for such mashing; as soon as I had bought it and worn it as a suit, I was considering the trousers and jackets as separates – a pair of white trousers and the Prince of Wales jacket in the spring, or perhaps a light blue linen jacket with the trousers in the summer; a woollen cardigan and the trousers for a simple Astaire-esque casual look, or a dark blazer with the Prince of Wales trousers, a silver tie and buttonhole for a modern ‘stroller’ ensemble. The titillation of the seemingly never-ending possibilities of a new acquisition is the reason why I enjoy clothing. I don’t enjoy the mashing merely because there is something vaguely rebellious about ignoring the established style sages who ward against such experimentation but because I like discovering that two items are worth more than their face value; the human delight in conjuring ‘value’ is utterly intoxicating.

The inherent risk with such mixing and matching is that, sometimes, a man gets it wrong. Ho hum. I find this happens mainly when there are no ‘anchoring’ items in an ensemble that make the ‘mashing’ look intentional; if you’re wearing, for example, different trousers with a suit jacket, I find it’s useful to use the accessories available to pull the trousers into the outfit. A complementary tie or pocket square will help. Secondly, I’d try to avoid pairing colours that are too close in the spectrum. I once saw a gentleman pair a dark grey jacket with a slightly lighter grey trouser that, instead of conveying a look of assuredness actually gave the impression he had either raided a charity store or had got dressed in the dark. If you are wearing garments of the same colour, it is important that the contrast is exaggerated; a dark grey should only be accompanied by a much lighter grey.