This Summer I Won’t Be Wearing…Printed T-Shirts 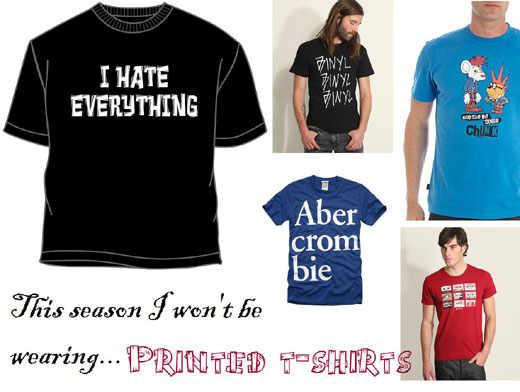 The chilly start to the spring has passed. As fleeting, and as irritating and inconvenient, as an Icelandic ash cloud, the complaints of an overcoat April seem a long time ago in the familiar warmth of mid May. Suddenly, the trenches, hefty cardigans and scarves have all gone; in the bright sunshine and gentle breeze, women flit around in blouses, slub silk Capri pants and pastel skirts. Men, feeling the heat at last, walk to and from work in khaki cotton suits and navy driving shoes, dabbing the sweat from their shining Clubmasters. Such a scene is all but a fantasy on the majority of London’s pavements. There are few areas where such chic wildlife has habitat although loitering between Old Bond Street and Savile Row, ideally taking a coffee or Campari at Cecconi’s, is a good bet.

The rest of central London is subject to the prowling of an altogether different animal. Trainers are on his feet, jeans, cargo pants or oversized shorts cover his legs and for his torso, his version of a pièce de résistance; a printed t-shirt. He possesses quite a few of these. Some of which have a small amount of artistic merit – employing an attractive graphic or pattern which, although striking, lends itself to a certain cheapness of aesthetic (isn’t it better to purchase a shirt with an appealing pattern rather than a t-shirt with a print of that pattern?) but the majority of his t-shirts are covered in slogans. A few of these are simply advertising the brand; ‘Abercrombie & Fitch’, ‘Boxfresh’ etc, for which he pays a premium for the ‘privilege.’ However there are a huge number which point to no particular manufacturer. Nor do they offer some kind of interesting design which would render them even vaguely imaginative.

The majority of these t-shirts in his collection relate to viewpoints and lifestyle opinions that, ironically, the man is unlikely to hold at all if he was entirely honest with himself. Alcohol is a popular reference point, as is copulation and, interestingly, anti-establishmentarianism. Brazen, tacky, childish and utterly lacking in wit these t-shirts are growing in popularity and extremity of message. They range from the moronic, insulting and seemingly pointless; ‘iPooed’, ‘F**k You’ to the… even more moronic and patently pointless; ‘Beer…not just a breakfast drink’, ‘I Came on Eileen’, ‘My Wife Really Sucks.’

What really bothers me about these t-shirts is not just that the wearer is using some dubious one-liner as a disingenuous introduction to their wannabe personality but that this is accepted as legitimate clothing. Wearing clothing with writing on it, outside of a professional or sporting context, is pitiful. Let alone that the majority of these statements exhibit a lack of respect for countless groups in society, let alone that they are aesthetically vomitous and let alone that they are an extraordinary waste of good money, it is preposterous and laughable for a man to circulate his stupidity amongst such a wide audience when he could simply confine it to those within his social circle.