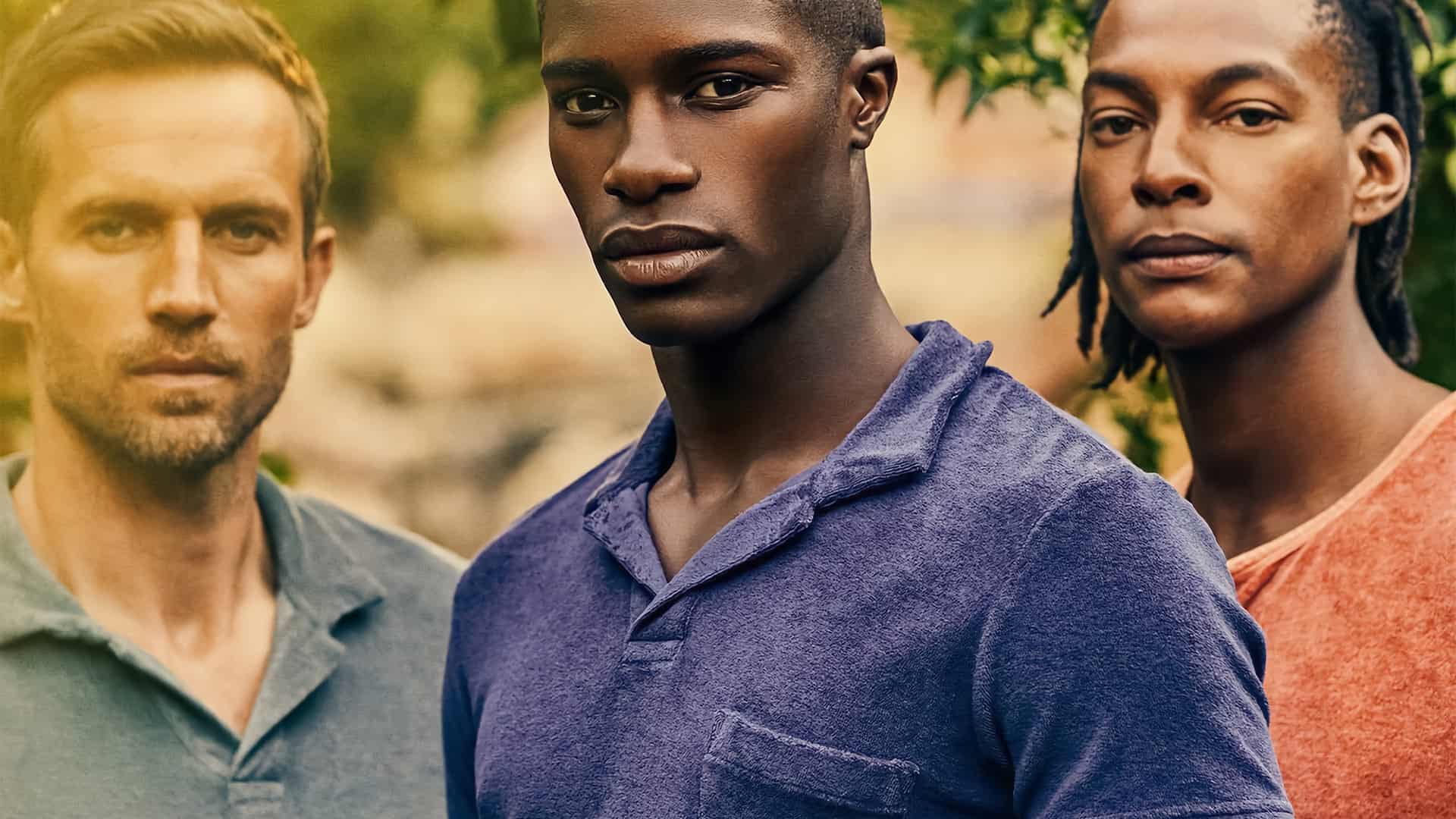 This super-comfortable knitted cloth has become popular in recent years as loungewear has gone mainstream. Here's why you should be introducing some French terry to your wardrobe in 2022.

In recent years, and with a little help from a lockdown or two, we’ve seen an explosion in the use of French terry cloth (also know as terry towelling) in modern menswear. It makes sense, seeing as ‘loungewear’ has become less about what we sit around in at home, but rather what we wear on a day-to-day basis.

The casualisation – for want of a better word – of men’s fashion has meant that super-soft and comfortable fabrics such as French terry are in ever more demand since the necessity of a ‘work uniform’ has evaporated for many. Sweatshirts, track pants, shirts, polos and tees have all been given a French terry makeover in recent years as athleisure consolidates in our everyday wardrobes.

Interested in adding a piece or two to your daily rotation? Read on to discover its origins, the key pieces you should consider for your wardrobe, and the brands that are nailing it.

What is French terry cloth? 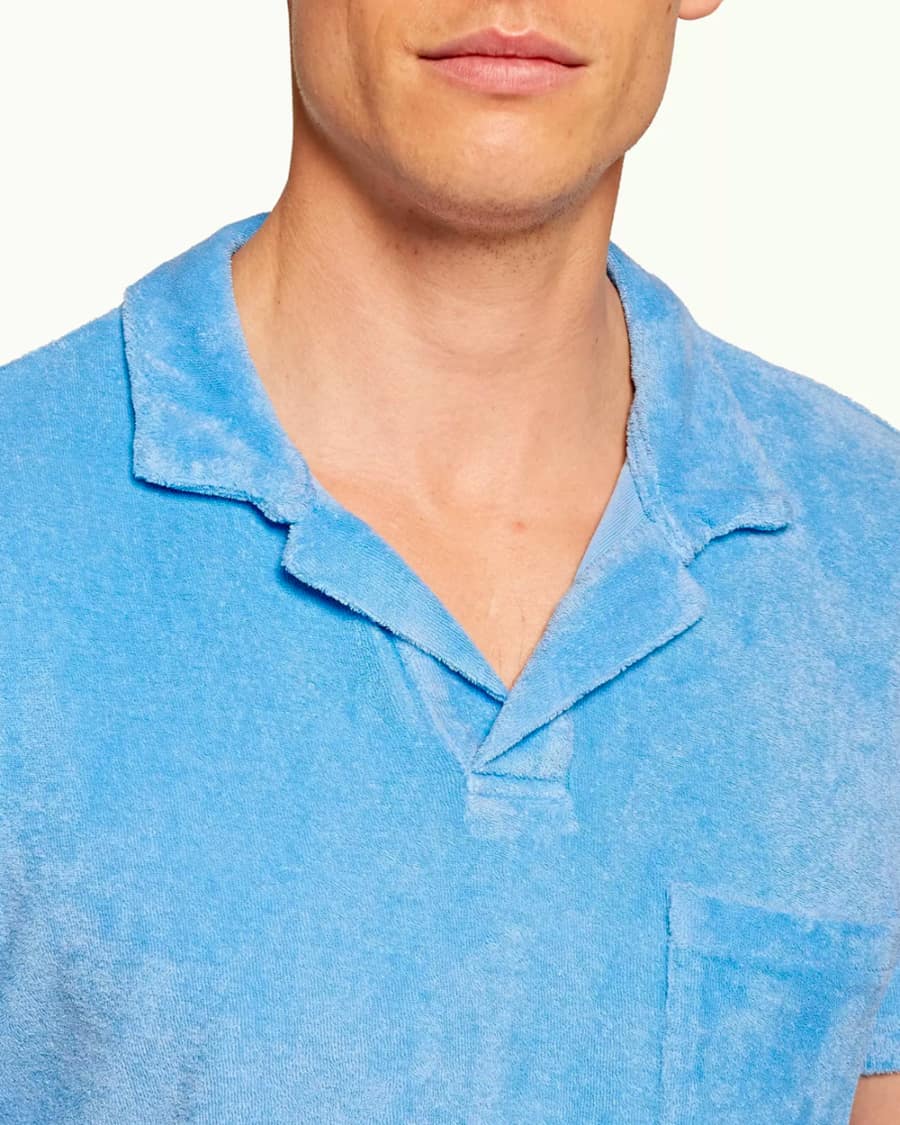 French terry is a knitted fabric made from 100% cotton or cotton blended with elastane, rayon or a similar stretch fabric. Typically a midweight cloth, it features loops of yarn on one side, and a smooth, soft surface on the other.

The loop construction makes it extremely absorbent and moisture-wicking, hence why it is sometimes referred to as ‘towelling’ and has long been the choice for the type of pieces you’d wear on vacation after a dip in the sea or pool.

The history of French terry cloth

The genesis of French terry came first in the form of the towelling fabric we know today, some time in the 1840s. It wasn’t cotton that the French used at first but actually silk, which you’re more likely to find in a parachute today than you are in a wardrobe.

The word ‘terry’ comes from the French word tirer (to pull), and refers to the construction method whereby the longer knots of warp fabric are pulled through the denser woven weft of the cloth. Terry towels began to be mass produced in the 1850s when Englishman Samuel Holt invented a machine to weave the cloth at scale in Greater Manchester.

Terry towelling is different to French terry, which is constructed from a lighter weight cotton with the looping only on one side of the cloth, rather than both sides of a towel, and yet both saw time of day at the beach, with the French upper classes preferring to wear French terry polo shirts due to their absorbency. 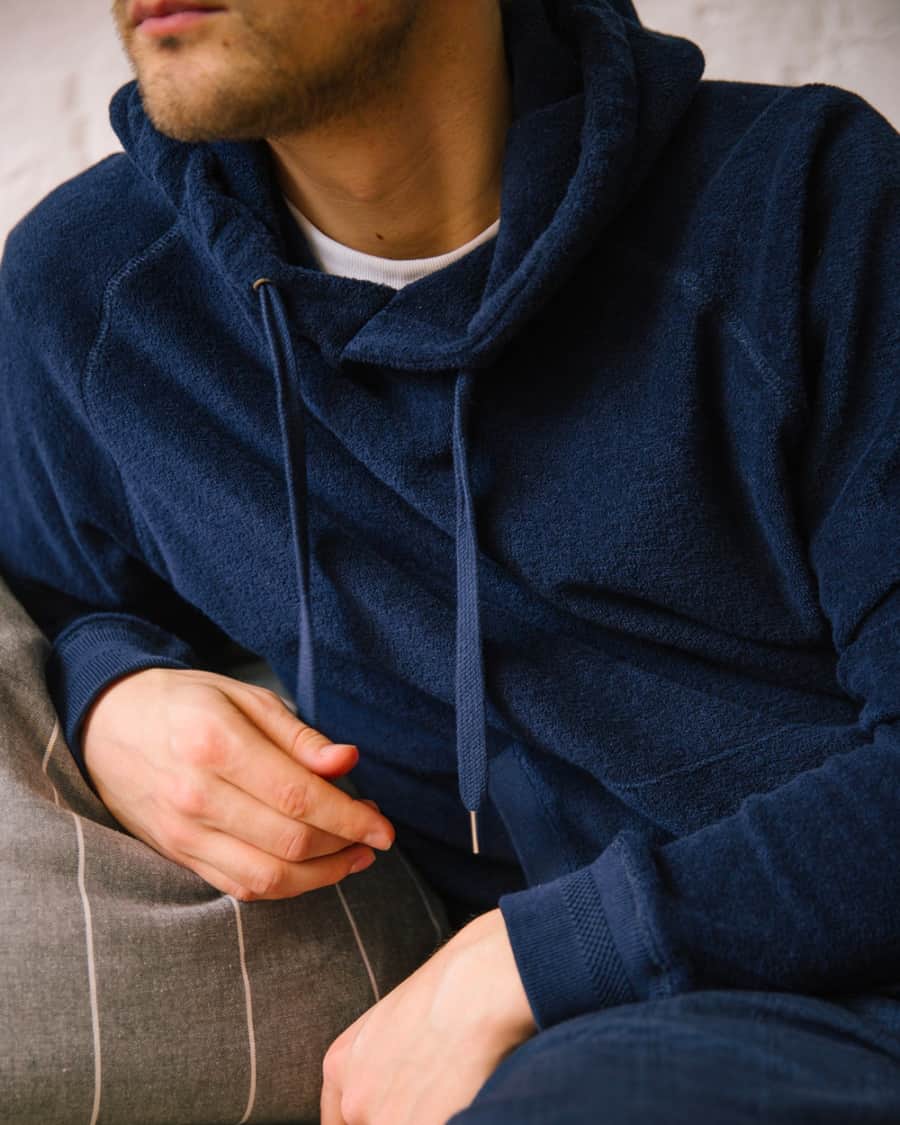 Due to its lightweight and absorbent properties, French terry is a perfect fabric for comfortable classic sportswear, from sweatshirts and hoodies to tees and jogging pants. Classic crew-neck sweats are probably the most popular silhouette in terry cloth. 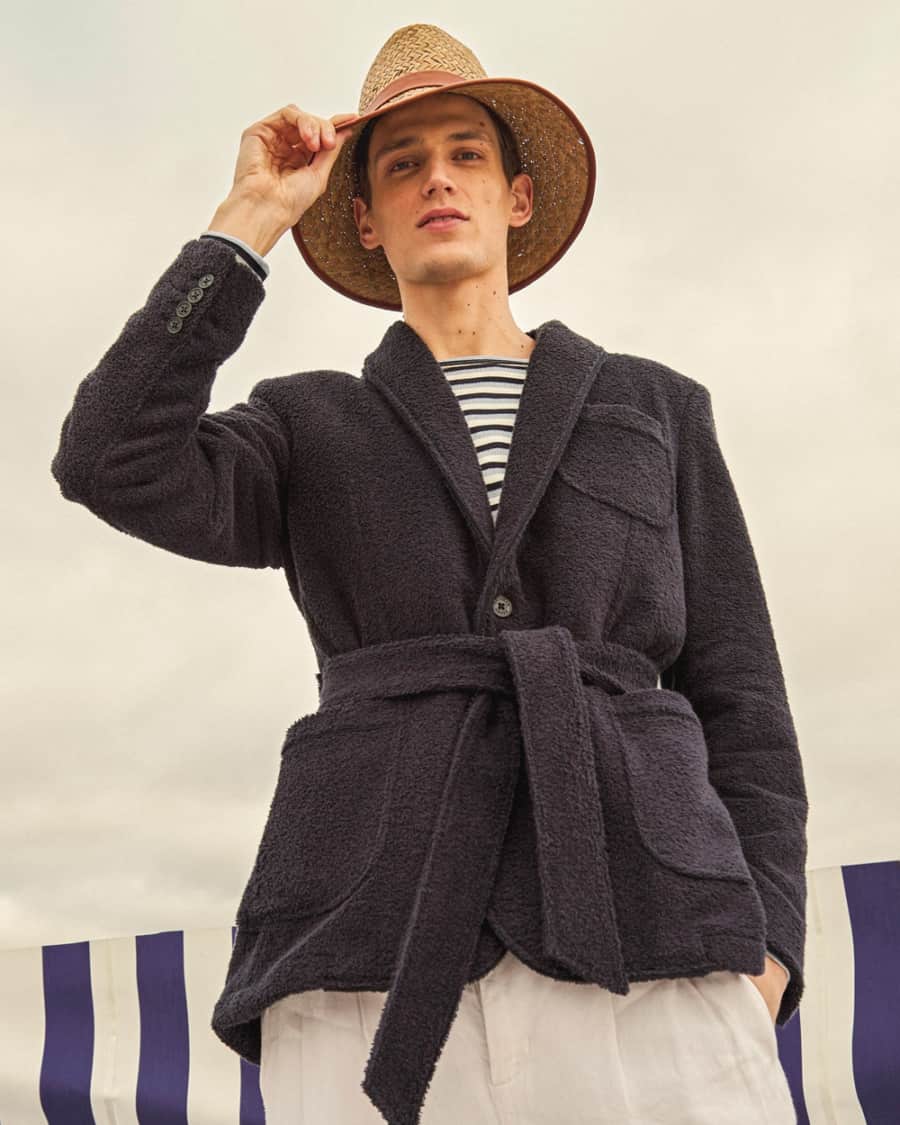 The proliferation of loungewear over the last decade has seen an abundance of pieces made from French terry, most notably dressing gowns, but also pyjama sets and house pieces such as loose joggers and T-shirts. 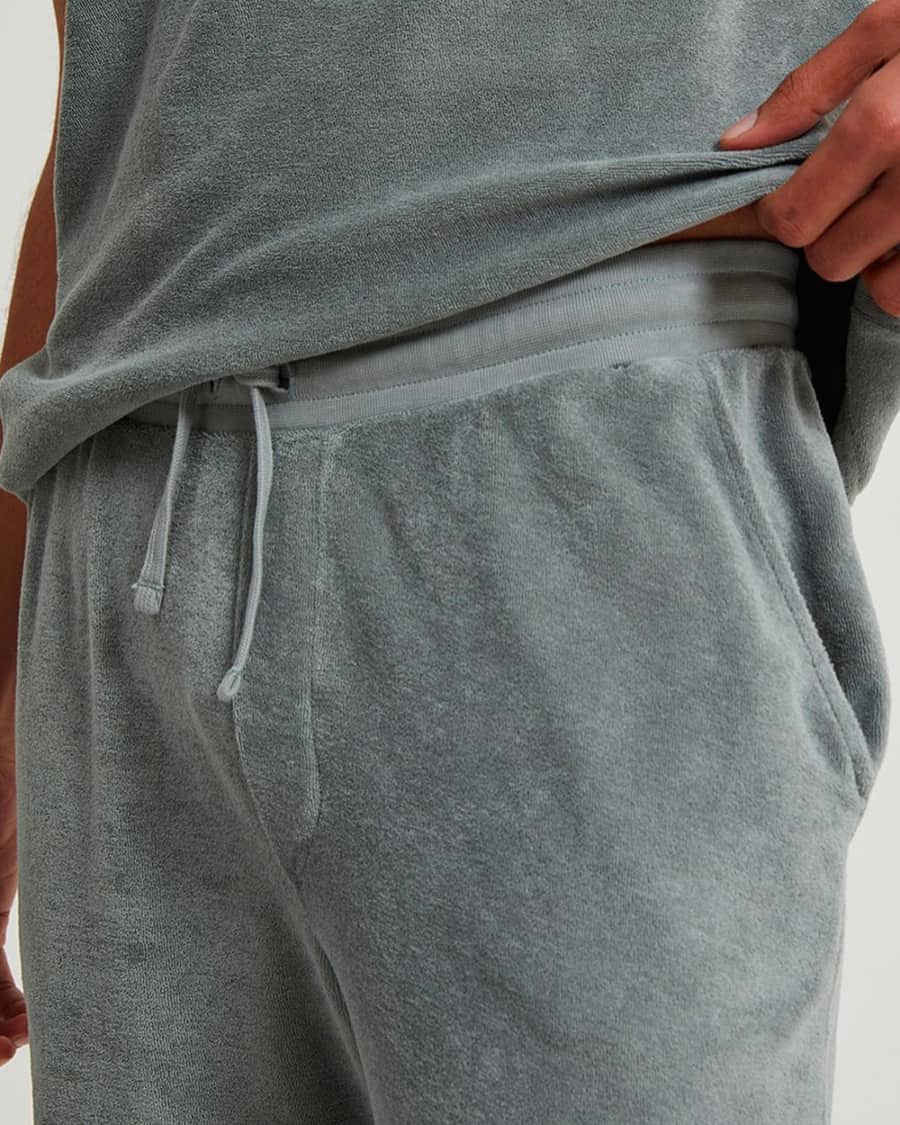 The summer is where French terry is most comfortable, bringing utility and texture in equal measure.

It has become a popular shorts fabric thanks to its tactile handle, making it a great choice for gym gear, but you’re more likely to see it in resort collections with shorts designed specifically for lounging around the pool. 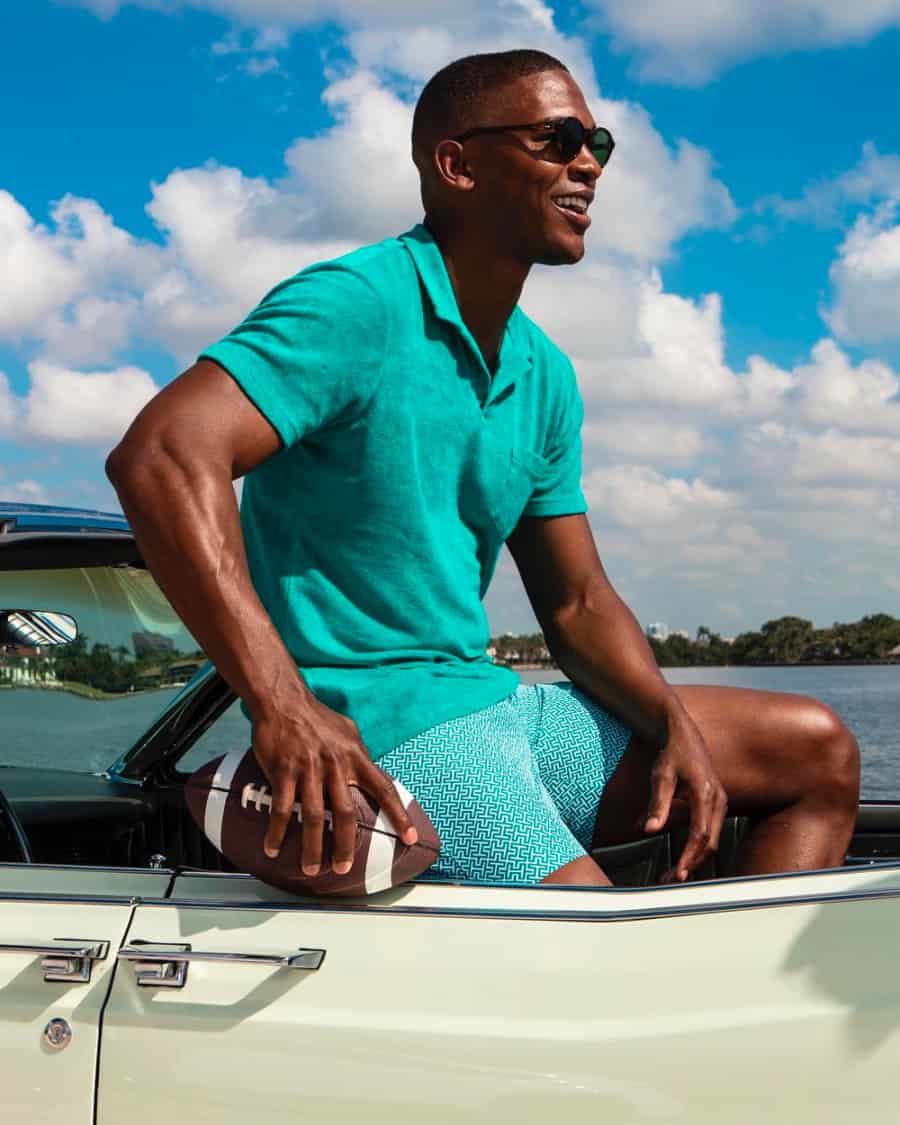 The polo shirt is probably the one garment most associated with French terry, having had a renaissance in recent years thanks to brands such as Orlebar Brown who has been championing the fabric through its excellent resort collections.

Practical yet stylish, smart yet casual, the softness of the cloth and addition of a collar enables you to go from pool to restaurant without the need to change. 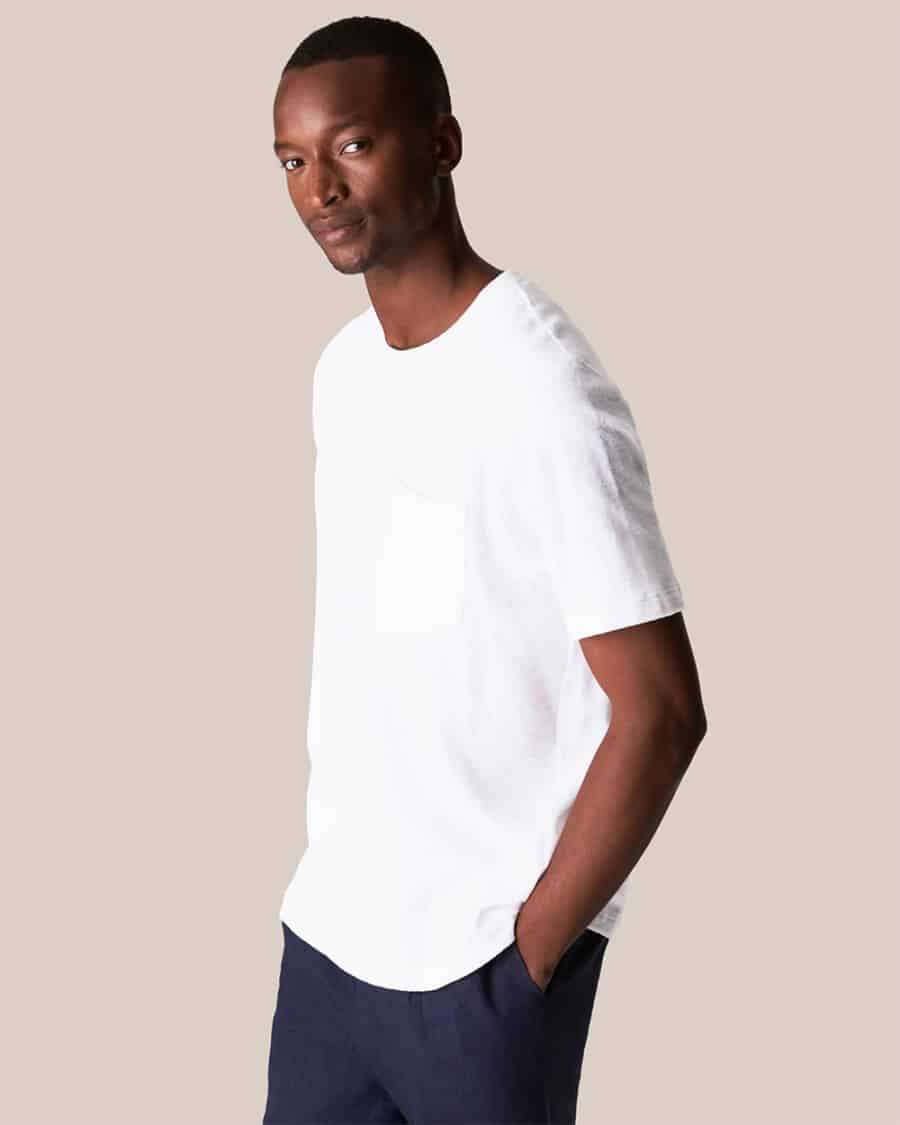 In T-shirts too, French Terry has been much more widespread in its use, bringing a contrasting texture to plain cotton styles.

Try switching your everyday white tee out for a terry cloth version and you’ll quickly realise just how much interest it can bring to a simple shorts and T-shirt look. 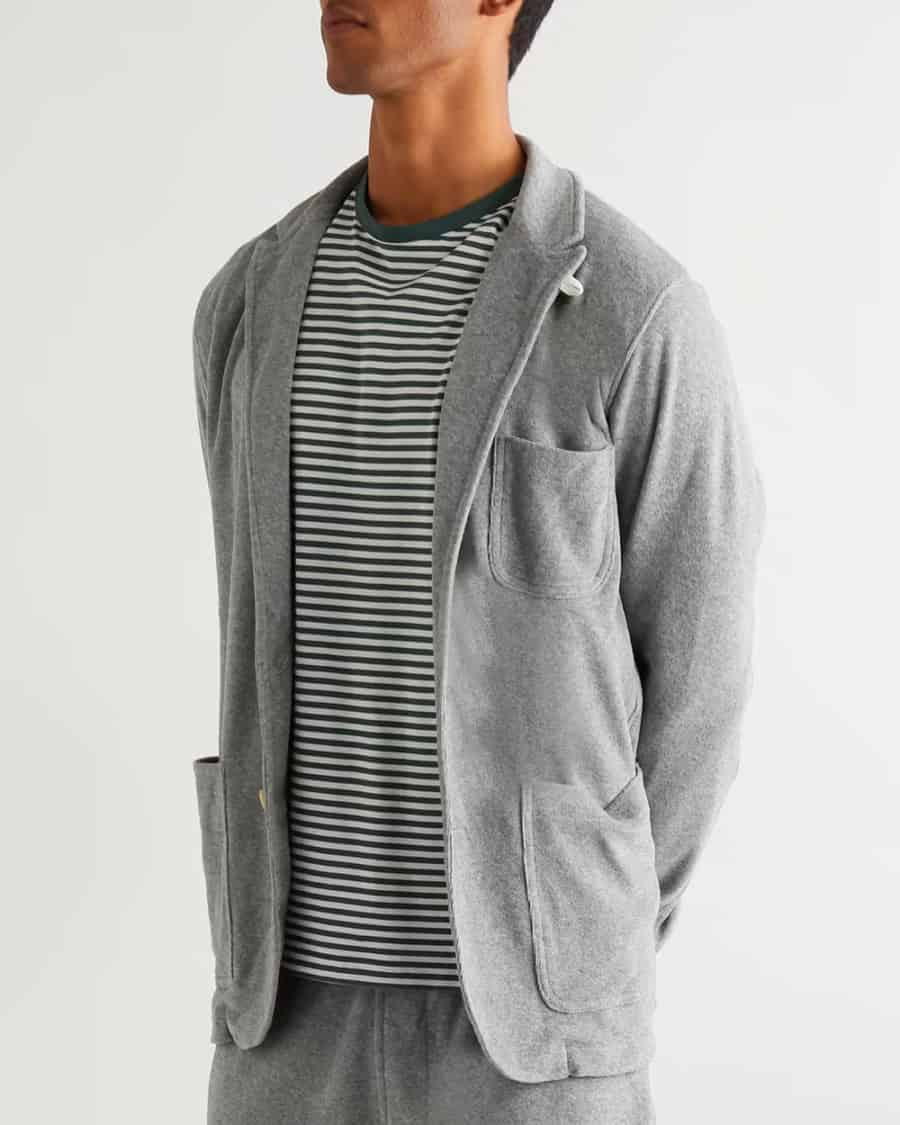 The resort blazer is a relaxed tailored garment designed to be worn from pool to bar, presumably at some of the world’s finer hotels and establishments. The use of French terry means there is almost no formality to it whatsoever, despite the classic silhouette.

Throw it over your swim shorts with a Breton tee for a look that would not be out of place on the Côte D’Azur.

Frescobol Carioca always brings a unique blend of Brazilian beach culture and Mediterranean sophistication to each collection, in which French terry plays a significant part, especially among its polos.

Cut with a Cuban collar, Frescobol’s terry cloth polo shirts are constructed from a unique blend of tencel, linen and cotton, creating a super-soft and lightweight material perfect for summer wardrobes.

As far as resort goes, there is no greater game-changer than Orlebar Brown, the brand founded by Adam Brown in 2007. Orlebar Brown single-handedly popularised the concept of the tailored swimming short, combining the principles of sartorial trouser making with a contemporary need for a smart and sophisticated swimwear.

Similarly, it has spearheaded the renaissance of French terry cloth, using it expertly across a range of resort collar polos, as well as sweatshirts, hoodies and shorts.

OAS was founded by Swede Oliver Adam Sebastian as an antidote to the Swedish winter. Inspired by family trips to Barcelona as a child, OAS produces stunning resortwear and loungewear collections season after season, incorporating vibrant patterns and fine fabrics, not least French terry.

From beautiful bright terry polos to Cuban collared shirts via patterned terry cloth shorts and even terry espadrilles, there’s no other brand that puts this brilliant fabric to better use.

New York-based Theory is our go-to for elevated wardrobe essentials in a muted colour palette. In fact, the aesthetic is more Scandinavian than it is ‘American’, but we’re not complaining.

This season it has produced a range of ultra-soft Portuguese terry cloth hoodies as part of a capsule collection with visionary Dutch designer Lucas Ossendrijver. They are perfect for lounging in or layering underneath an overcoat for a relaxed yet chic athleisure look.

MR PORTER’s in-house label – Mr. P – can always be relied upon for classic wardrobe staples, of which French terry polo shirts are certainly one.

Produced in a soft organic terry cloth and featuring an unstructured resort collar, the shirt is available in four different tones and can be worn as a set with matching French terry shorts.

The sustainable clothing brand founded by surfing legend Kelly Slater has quickly made a name for its commitment to environmental and social good, but just how good are its clothes? Well, pretty damn good, if you ask us. Outerknown does not cut any corners when it comes to fabric selection and quality, and being a brand that has the love of the outdoors at its core, it’s no slouch with French terry cloth either.

From hoodies and sweatshirts to snap shirts, polos and tees, Outerknown utilises a blend of organic cotton and recycled polyester to form a strong yet very soft terry cloth that’s ideal for wearing casually, indoors and out.

British menswear icon Oliver Spencer starts the design process of every collection with a strict focus on fabric, which is why his designs always consist of innovative cloths you won’t find anywhere else.

In recent seasons, Spencer has incorporated a unique French terry with wales, much like a corduroy fabric, deploying it to great effect across T-shirts, polos and jersey basics. He was also one of the first to use terry cloth to create a completely unstructured lounge blazer.

As you would expect from the pioneering British loungewear brand, Hamilton & Hare is a fan of French terry. One of the first dedicated loungewear labels in the UK, the Chiltern Street-based company has a stunning range of minimalistic pieces crafted in super-soft terry cloth, including indigo-dyed trackpants, hoodies, sweats and house slippers.

If you need some an excuse to stay at home, Hamilton & Hare will provide the goods.