Cad and The Dandy Part 1: The Fitting 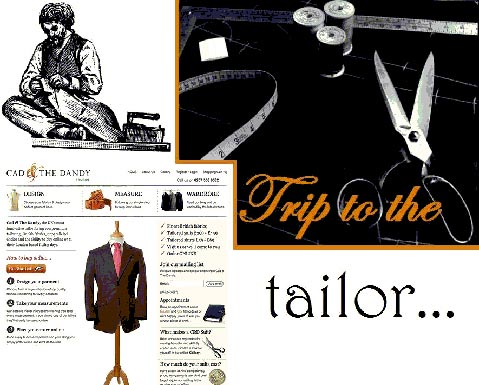 I have never been one for change. I have never possessed enough optimism or employed enough acquiescence to be considered one who embraces the future; one who relishes opportunities for change. The Chesterfields, unfortunately, have always been rather afraid of modification. A perverse notion of preservation permeates the blood of my family – perverse as this particular brand of conservatism fails to acknowledge the evolution of the human being and, perhaps more particularly and plainly, the people we are. At school I was fortunate to be in the form group of a master capable of the difficult skill of commanding his pupils awe and inspiration whilst also causing them to respect fear and precaution. He would always press upon us the inevitability of change and the importance of preparation for this change; a philosophy that works especially well in the current financial climate.

Mourning the loss of high manufacturing standards, we can either sink or swim; it’s all very well trudging disconsolately around high street shops, moaning about loose threads and the price of consumerism. The real challenge is surely not acknowledging that problems and disparities exist but in providing the ‘other way’; the system which offers, where there is need and hidden demand. Tailoring, to many, conjures an image of wealthy magnates and captains of industry stepping from gleaming carriages, seen to by attentive and obsequious staff in austere yet elegant surroundings, puffing on cigars as they flick away the twelfth alpaca sample. In reality, tailoring is not all about the immaculate and privileged world of multimillionaires; it’s much more of a Dickensian affair – a cross section of tailoring society and wares. No longer is tailoring, in the globalised world, a matter of accident of birth; the wealthy international can jet into Savile Row as often as he chooses, as the budgeting pupil barrister can fly to Hong Kong for a less expensive service. And these days, the tailors fly in to some of the world’s most global and influential cities, conducting tailoring services in hotel rooms; for how many miles Man must have flown for the sartorial requirements of a single gentleman.

Since attending the offices of Cad & The Dandy (http://www.cadandthedandy.co.uk/), a London based tailoring service that measure up customers at their City and Mayfair addresses, I have thought with a mixture of pleasure and guilt of the considerable thought and craft that is being pursued for my satisfaction. After meeting James and Ian I was instantly reassured that the treacherous waters of ‘international’ tailoring can be navigated safely. Cad & The Dandy is a relatively young modern tailoring service but their philosophy is as old as the Row; provide well-cut suits, tailored to a gentleman’s measurements in an array of luxurious and long lasting fabrics, with an attention to detail that is rarely seen. Having retired from the ruthless rat race of the City, the Ian and James have pursued a business ideal that sets standards and philosophy before profit. Others, I commented, might pursue the ideal balance sheet – minimal overheads and manufacturing costs resulting in greater profit margins. Though both of them understand the necessity of profit, they are far more interested in discussing fabrics, the grand old mills they have been to and their reverence of the Row. They point out that their jackets are finished properly – tailoring to last – and that making the individual customer look as elegant as possible is in their personal as well as their business interest. The consultation and fitting simply flew by which is perhaps unsurprising – three chaps isolated in a quiet room with coffee, fabric samples and sacks of sartorial stories. A great number of measurements were taken and were then entered into the account on the slick and attractive website. Measurements which can also be used, diet permitting, for any subsequent order. “We’ll stay in touch” said Ian with a smile, heartily taking my hand. A change is in the air. The fitting over, I look forward to the delivery with great anticipation.