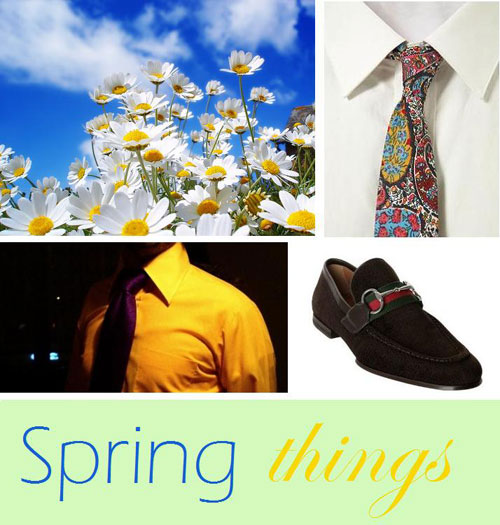 For the northern hemisphere, this winter has been a singularly long and cold one; snowstorms, biting winds, city shutdowns and days off school. The Bing Crosby fantasy of the ‘magic’ of snowfall wore rather thin in the December blizzards and there were certainly no punters in Starbucks, as they cupped their lattes between their frozen hands, singing along with Ella to the pollyanna winter classic ‘Let it Snow!’

Dark and bleak, with only the light of the festive season to warm hearts, this winter’s end cannot come soon enough.

Spring is around the corner. Soon the heavy overcoats, scarves, woolly hats and gloves will be locked away until the year end. The flowers will appear and the cold grip will cease. I like to begin each spring with a few new purchases, so thrilled will I be that I can rise each morning without fear of frostbite. After the monotony of wrapping up merely to chill the bones, the novelty will rejuvenate my somewhat jaded interest in composition.

My choice of spring tie would have to be a Liberty print cotton paisley. Unlike my winter ties, all of a somewhat sombre style, my new tie purchase for spring will shout sunshine and songbirds. It’s rather flowery but this is hardly an inappropriate fashion for the coming season. Worn with a blue peaked lapel suit, a cornflower blue shirt and some brown wholecuts it will convey a sense of floral fun.

My choice of spring shirt would have to be the yolky yellow that has recently caught my eye in Lewin’s on Jermyn Street. Although about as subtle as a stretch pink Hummer, it can be pared down to a respectable level with clever choices of tie and suit. Darker is dignified in this case – a dark suit and dark tie (but not black) will calm the effect that such a strong and noticeable shirt will have on the populace. It will also look wonderful later on in the year with a summer tan, blue blazer and white trousers.

Loafers are perfect for spring. I have been rather taken by the idea of a pair of classic Gucci loafers with the classic metal bar decoration. I saw the promotional and on-set photography of the upcoming Oliver Stone film ‘Wall Street: Money Never Sleeps’ and noticed that Shia LaBeouf, rather stylishly attired, sported a pair. I had long doubted their versatility and their aesthetic but the photographs of Mr LaBeouf wearing them with suits and casual outfits, with equal flair, convinced me. Somewhat retro, with the right look – and the right cut of trouser – they convey a cool chic.