One of the most vivid memories of my early sartorial confrontations with my father is of his exasperation at the position of my trousers. I was in some ways an awkward teenager, both physically and emotionally, and I was for a period rather influenced by my own age-consciousness. I believed that my youth was best at odds with the traditional way of things; I wore trousers, quite absurd to me now, of more than questionable length and style. When I dig them out on nostalgic sojourns back to the family home, shaking my head and tut-tutting at the ‘way things used to be’, I still cannot quite believe how poor some of my clothing choices had been. And the ghosts of this mistaken attitude towards my wardrobe are everywhere. For there seems to be no commoner mistake, for a suited gentleman, than that of the ill-fitting trouser. 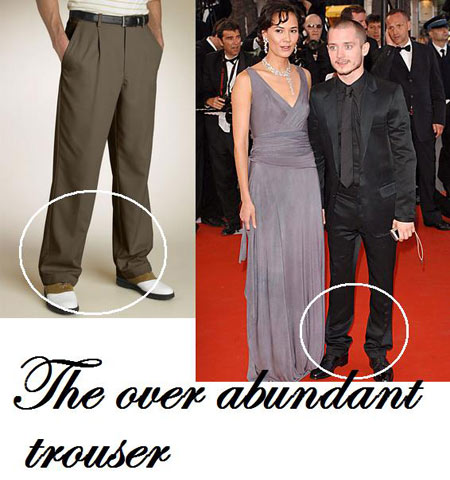 I take the long walk home from Chancery Lane, passing accountants, lawyers, civil servants and the odd banker and it never fails to flummox me how poorly cut many of their trousers are. For on a good number of them, though they shuffle along in acceptable jackets of the correct size and style, my eye is horrified to see, as it moves down the body, the folds, nay waves, of trouser flopping onto the shoe.

‘Look’, the hypothetical reader would begin in response to my bewilderment, ‘these are off the rack suits and these guys probably don’t like wearing them, and they don’t care; it’s that simple.’ Although this is a valid point, I would wager at least 2 in 5 of the ‘overabundant trouser brigade’ would be interested in changing their look were they given visual examples of a better cut of trouser. It might be a want of caring, or it might be a lack of experience; some people are simply more fussy when it comes to shapes, lines and silhouettes. Rather like a man who wanders into an art gallery, not really knowing what he likes, but stating the simple philosophy that he’ll ‘Know what he likes when he sees it.’ 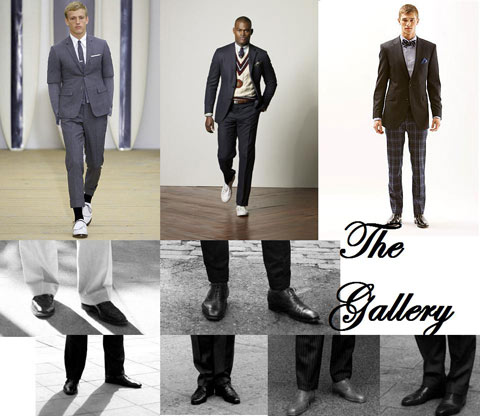 My own revulsion is a reaction to the sight of the disruption of the straightness of a leg by the way the trouser concertinas into the shoe. However, there are those who would themselves be rather put out by a leg that was cut too short, that sat too low at the back heel or that made their feet seem awkwardly larger. It all depends on taste, and the world is practically an enormous gallery for men wishing to find ‘what they like.’

This cut of trouser is my personal favourite. My father favours slightly more length in his trouser but I prefer there to be as little fold at the bottom as possible; the trouser sits just over the laces, leaving nearly the entire shoe exposed. Tailors would disagree and disapprove such a length; they would prefer the trouser to fall down at the back of the shoe to sit just above the heel itself.

Mr Thom Brown is often referred to as the ‘saviour’ of men’s fashion, but few men seem to agree with his cut of trouser. It is drastically short, often comic in effect, and though it is indeed very youthful and rather quirky, it’d take a brave banker or an audacious accountant to swank into work on a Monday morning.

Some contemporary tailors would disagree, but the traditional ‘tailors favourite’ cut of trouser (though many will predictably claim to ‘tailor’ to the individual client) is the trouser that, as previously mentioned, sits just above heel and covers the laces. For older gentlemen, this is the most common; Prince Charles’ trousers are perfectly cut in this manner.