Why the Fuss: Thom Browne 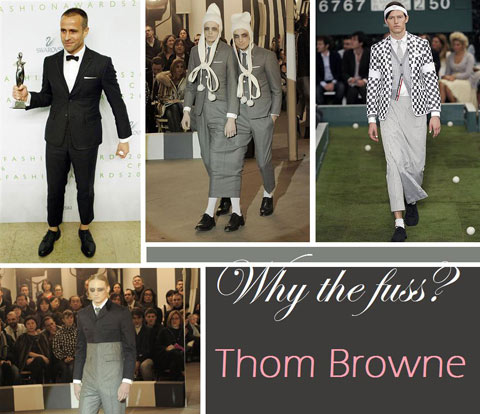 First in this series, I made evident my puzzlement as to why Abercrombie & Fitch received so much attention and custom; a piece which attracted more than a few comments, most of which echoed my bemusement of that peculiar reverence – a reverence I have recently been witness to as the velvet roped queue for the precious sales items at the Burlington Gardens store snaked around Savile Row. The subject of this piece is an altogether different kettle of fish, for there are no squeaky-clean-teens clamouring at the emporium’s door; no loud thumping music, soap-smelling oily doormen or poor parents, reluctantly removing credit cards from wallets. For Thom Browne, one of the most unconventional contemporary clothing designers, appeals to an entirely different group, although this ‘appeal’ is something which I intend to analyse thoroughly.

I was browsing the racks of sale and non-sale items at Harvey Nichols, temple of fashion and furnishings, when I came across the Thom Browne concession which was really a small number of racks. I had read a great deal about Mr Browne’s clothing and philosophy; the so-called ‘saviour’ of men’s fashion, revered for offering simpler but eccentric choices. He is applauded for the tailoring and construction of his items, notorious for their ‘overgrown schoolboy’ look; incredibly short trousers and now incredibly short jacket sleeves. Many credit this as brilliance; tasteful and unique. Unique it certainly is, as I am unaware of any other designers who have attempted the short trouser trick before, although whether it is fully tasteful is questionable.

Some see Browne as a fad, a reaction to the lack of invention in menswear over the past 50 years that has led critics of fashion to rally and chorus that our designers have run out of ideas. Browne, superficially, counters this suggestion but an ‘idea’ isn’t necessarily a good one merely because it is new. For one thing, although fashion is highly influential, the mass of choice for the consumer puts a good deal of power in their hands; gentlemen are unlikely to have their heads turned by a minor whim. ‘It’s not for the masses though’ screeches a Browne-ite chum of mine ‘it’s for people who are capable of being different.’ An admirable quality indeed but for me, Browne is a symptom of our artistic modernisation; frustrated at our lack of aesthetic evolution, we reach out for the new in desperation. A recent article in The Times argued that we are entering a century of rapid change; the internet will feed our constant hunger for the new. This, the writer argued, makes us well prepared for the tough years immediately ahead: ‘speed of change’, the mantra for the 21st century.

Browne to me is rather like something that appears in the Tate Modern that luvvies, other artists and critics go absolutely mad for, but that the populace at large considers irrelevant. The other similarity between certain items of modern art and the sartorial products of Thom Browne is that many consider them to be monstrously overpriced. A sleeveless cashmere cardigan in ivory could be found for £250 (£160 in the sale) in Ralph Lauren. At Thom Browne, though the design was no more avant garde, the cashmere not discernibly better, the same item cost £900. I saw a cashmere tailcoat in camel with grosgrain ribbon detailing for £6,225. It seemed to me that purchasing an outfit from Mr Browne could cost as much as a couple of bespoke suits from Henry Poole.

Those arguing for Mr Browne may defend his ‘vision’ – something which Brooks Brothers considered worth using – the fact that he manufactures high quality garments using good materials and that the Thom Browne man can always stand out from the crowd. I accept these advancements of opinion; I myself happen to think that ‘interesting’ and ‘expensive’ do not always need to go hand in hand. I also think that quirky as short trousers are, they will never become a serious alternative. I appreciate that ‘new’ fashions are very rarely well received when the curtain goes up. Virtually all major changes in fashion have been accompanied by responses of ‘it’ll never last’, tut-tuts of despair and in some cases (the top hat) persons fainting on the street. But there is a difference between shock-on-purpose and shock-for-purpose. I have a feeling that Browne’s items, lauded, sought after and highly priced, are not worth the fuss.