A Sorry Experience At H&M 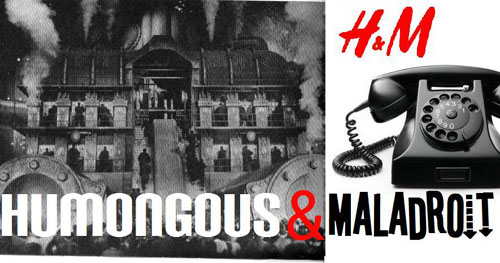 As a blogger, I have developed something of a reputation as a high-street champion. It is not an unfortunate or accidental reputation; I make no disguise of the fact that I look for style pieces in a number of places that would make the hardcore tailoring fraternity blink.

While many save and splurge on grand items from vaunted style emporiums, I drop comparatively smaller sums, more steadily, at retailers such as Zara and H&M. As ubiquitous as they are, these retailers have impressed me with their flair, use of better-than-average materials and, most importantly, their prices: for the quality of design, the price is always palatable. I spend as little as some spend on a night out on several items from one of these stores and, though the delight in the bargain is short lived, I am largely satisfied with the longevity of the items I have bought.

My experience of the customer service, or indeed any of the ‘workings’ behind the scenes of one of these gigantic retailers, has been, until recently, rather small. Never had I needed to throw up the great curtain and un-complicate the mighty gears and levers that keep the machines churning. There had been no need.

The thing I already understood about H&M was that stock was uncertain – they get a batch delivery of a mixture of clothing items every single day. What I did not know was that this ‘batch’ changed not due to the demand of clothes in a particular store, or demand across a number of stores, or even if stock in one item was low – replenishing ‘low’ stock was the most obvious and most memorable reason for deliveries that I remember from working in a clothing store.

No, the ‘batch’ was simply an inexplicably haphazard selection of a variety of H&M’s clothing line. It could be a delivery of fifty jackets and hats that hadn’t sold a single unit; if they couldn’t fit on the racks, they’d be in the stock room until sale time when they were generally chucked for less than half price.

I had enquired about a suit; an all wool chalk stripe with a peak lapel and a matching waistcoat and trousers which I had planned to adjust in my own way – new buttons and turn ups. I was given the explanation about ‘batch’ stock and three five digit numbers with which I could contact stores nearby to see if they had the items in question. Having exhausted the list within an hour, with no success, I decided to write to H&M’s UK office – a postal and email address that was irritatingly difficult to find – in the hope that they, in their lofty position on the confusing ‘gears and levers’ tree, would be able to correct. My written letter received no response (no surprise there) but my email, which enquired about the availability of the item was, to my delight, deemed worthy of a reply.

However, any hopes of a response that began ‘Of course we’d be happy to locate the garments you desire…’ were dashed by the first line which read;

“H&M are not able to source any of our garments as we do not work with a computerised system due to a fast stock turnover therefore we are unable to locate stock within stores.”

Boo! What a great disappointment. Although somewhat expected, it was peculiarly exasperating to see what had been until now an embarrassed mumbling from H&M staff in hard and clear lettering. I was pleased to see that I had been correct in one of my expectations – the items I had enquired after were ‘current’ season and should be available in the stores for the next few weeks. The problem was that there were only 24 pairs of trousers and 85 waistcoats (not necessarily in my size) left in the distribution centre. The big setback was that the crucial element to the suit, the jacket, was ‘not being replenished.’ If I could locate one in a store in another location, by ringing around and quoting the five digit code, I might be able to find a pair of trousers and a waistcoat in one of the central London stores, although this was uncertain. What was certain was the great sense of victory I should feel if it all came together in the end for the search had been long and more than a little distressing.

I wrote back to the Wizard of H&M and asked if it was possible to pay for items over the phone, to then have them sent to me by post or perhaps to have them shipped to another store. Although this request seemed hopeful, on reflection it is actually quite reasonable – surely someone in their mythically massive customer service team should be able to organise this paltry request for such a persistent and faithful patron. To my great disappointment, this is the reply I received;

“Unfortunately this is not services that we provide (sic). However customers are able to place garments on hold for 24 hours to collect the garment in store.”

That was it. My special ‘call centre’ for the project, a spreadsheet of numbers and locations, was to be abandoned. Unless I planned to make an (expensive) train journey to Birmingham or Edinburgh there was not a hope in hell. Predictably, I rued my lack of nationwide friends and associates.

The experience, though remarkably unsatisfactory, has provided me with further elucidation on the issue of mass production and mass consumerism. Though I had expected, behind that great curtain, a crunching machine capable of altering a gear or two, instead I found a brick wall, with only a letterbox.

H&M will churn out the clothes by the million, throw them in the stores littered around the world but they’ll be damned if they know what they’ve produced or what they’ve delivered.