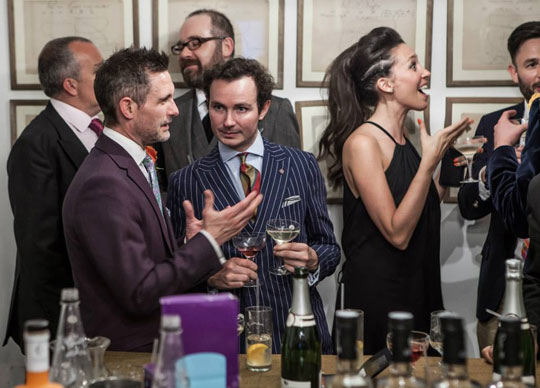 There aren’t many small businesses who are bold enough to ignore superstition. After all, the thing about businesses is that they’re not really ‘businesses’ at all; they’re just collections of human beings, with the same flaws and foibles that all individuals are cursed with. James Sleater and Ian Meiers are certainly human (though I haven’t checked thoroughly) but their approach to their recent elevation to the Mother Church of Tailoring, ‘Our Lady of Savile Row’, demonstrated somewhat supernatural confidence given that they were celebrating their move into the first floor of Number 13 on the 13th June.

Then again, why wouldn’t you forget about some hackneyed myth when you are moving your business into such a rarefied realm? After all, the Row is not only ‘promised land’ for the punters; tailors, deep down, are reverential of its history and its national meaning for the trade. Cad & The Dandy is now among the fortunate few, those houses who can claim to offer the veritable ‘Beluga brand’ of suits: Savile Row tailoring. 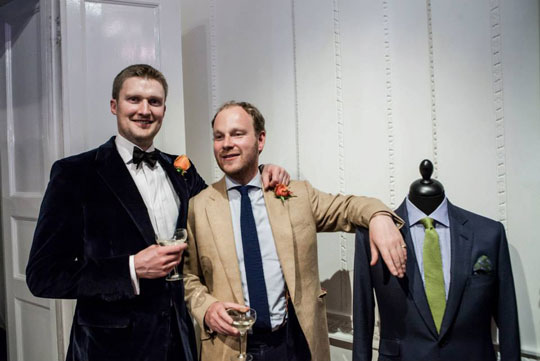 Their introduction to Savile Row’s ancient neighbourhood was not without fanfare. Not only did they invite the great and the good of tailoring, blogging and general dandyness to their string-quarteted housewarming soiree, they also marked the event with an unusual unveiling. “What a thing” they might have said “to actually make an entire suit on Savile Row.”

“Well duh” the population might have responded “isn’t that what they do already?”

Well, not exactly. You see, suits are measured for in fitting rooms on the Row; they’re even cut there and some of them are even sewn there.

But what are they cut with? Fabric. And where is that fabric made? 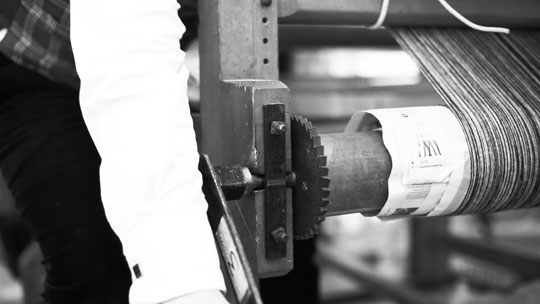 Holland & Sherry might boast Savile Row offices, but their famous fabrics are loomed many miles from the West One postal district, and for good reason too. The spectacular mills of Northern England that supply the nation’s best tailors are one of the last bastions of Britain’s industrial brilliance. Though nowhere near as prodigious as they used to be, their fabrics are still sought after all over the world; thanks, in no small part, to the demands from their grandest, Mayfair-based clients.

“I think Cad & The Dandy have always respected [Savile Row]” an employee told me “but they’ve got that little bit of irreverence, that cheekiness that sets them apart.” And what cheek! To hand loom a checked woollen fabric, on a vast, antique loom, on Savile Row itself, before cutting it into a bespoke three-piece? Impertinence!

“There is so much mystique about Savile Row tailoring” says Sleater, who modelled the finished suit on Cad & The Dandy’s vast cutting table, reputed to be the biggest on the Row “and that makes it rather unapproachable. What we want is to be the approachable face of Savile Row.”

There was something almost Blumenthal-esque about their fabric-looming party trick and their singular approach to myth-busting. “They want to show people how it’s all done; they’re lifting up the curtain” a fellow party guest observed. “They’re new” another pondered “but they clearly know how all the old stuff is done. There’s no Coca-Cola recipes here!”

Cad & The Dandy, like all tailors, clearly want their customers to be happy – but they also want to educate them, which is undoubtedly noble. After all, being on Savile Row has its responsibilities, as well as its privileges.