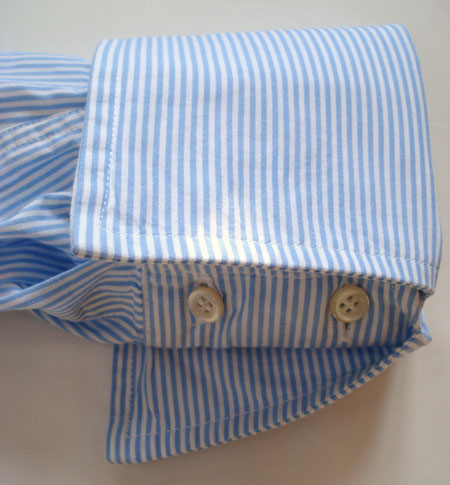 In Japan they’re known as the James Bond cuff; the Italians refer to them as Portofino; and the English –if they refer to them at all- call them the Cocktail Cuff or the Turnback.

You really won’t find very much written about cocktails cuffs, and even less in support. The best Hardy Amies can muster in his ‘ABC of Men’s Fashion’ is to say;

“one must recognise and condone the constant tendency towards simplification, and if the job of joining up four bits of shirt seems rather fiddly in the morning, you can strike a reasonable appearance with the single cuff of double thickness…”

Nicholas Antongiavanni, in his enjoyable and rather useful book ‘The Suit’ says even less:

“There are two kinds [of cuffs], button (or “barrel”) and French. (“Cocktail” or “Bond” cuffs, a clumsy attempt to combine the two, are too pretentious to be elegant.)”

I find this statement a curious one given that the double cuff requires an item of jewellery, which is by its nature showy.

It’s no easier a job to find the exact history of the Cocktail Cuff either. Three variations make the rounds, two sound reasonable and one could well be the nonsense of my own imagination.

The first, and most repeated, is that it was created by Turnbull and Asser and later adopted first by Sean Connery and later Roger Moore in their portrayals of James Bond, hence the term James Bond cuff. That last bit is true. The second, less well known story, is that it was the creation of London’s esteemed bespoke shirt maker Frank Foster (www.frankfostershirts.com), who is still in business (www.esquire.co.uk) and whose shop is located in Pall Mall. The third story is that it was created for David Niven by Ede & Ravenscroft, but as I can’t remember the source for this information it’s probably BS.

There is something wonderfully fraudulent about them. You get the weight and aesthetic of a normal double cuff without the ultra conservatism of double cuffs. To that end they work particularly well with odd jackets and trousers, particularly in bold patterns. They’re right, but not.