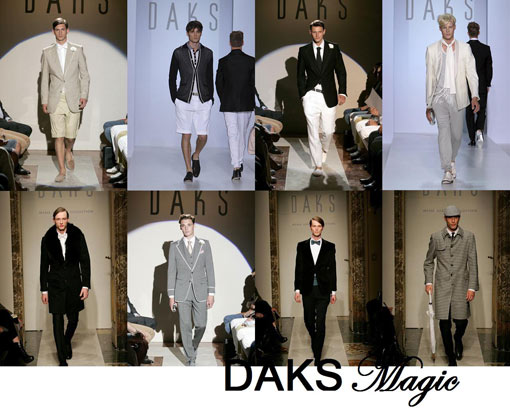 When the Simpson family opened their polished Art Deco doors on Piccadilly in 1936, it was to welcome gentleman interested merely in ‘quality clothing.’ So honest and simplistic were traders of old; very few enterprises now, opened to any amount of fanfare, find the trumpets muted and the drums silenced. Branding now is a marketing puzzle, honesty is a currency little used. New brands have to be seen to be groundbreaking or highly luxurious. Stalwarts like Burberry have been reclassified as ’aspiration-worthy luxury brands’ whereas to the oldest customers they simply make good rainwear. Similarly Vuitton, though certainly always a brand favoured by the better off, have seen their classification morph from ’luggage manufacturer’ into something ludicrous and impossible such as ’interstellar luxury logo-peddlers.’ It seems incredible that in 2008 a brand could be launched on such ancient and hallowed ground as Piccadilly with anything less than monstrous hyperbole.

Simpson’s, famous for their sturdy and reliable clothing, especially a particular pair of trousers with a patented self-supporting waistband, became DAKS (apparently a portmanteau of ’Dad’s slacks’) and DAKS Simpson came to be appreciated by the set who are largely, sartorially simple; minor royals, OBE’s and aging peers. Indeed, despite their initial marketing humility, I can almost hear the echo of a possible advertising punch; ’Something simple? Come to Simpson’s’

However, the DAKS of recent times, compared to the 1930s era of uniting ’quality’ with ’simplicity’ stands alone – a brand apart from its historic beginnings. Whereas the DAKS of old appealed to those with dicky hearts, wireless radios and soup-stained cardigans, the modern DAKS is challenging other British titans for the crown of “contemporary-retro-luxe“. And is that a re-branding you see?  Has DAKS left it’s humble roots and taken on some of the burden of dragging period English styles up and down the runway? Well, largely, it has. Whereas the Simpson’s brand seemed devoid of swank, the new DAKS, while not exactly bling-bling, is not shy of daring, although it should be noted that DAKS remains true to the patriotically nostalgic Simpson’s alumni; top hats and umbrellas make more than a few appearances at the DAKS shows. But there is certainly no sign of the innovation which caused the Simpson’s of the 30s to be filing patents.

To a polo-playing chum of mine, DAKS always represented good, solid English quality. It was never glitzy or glamorous, but it was appreciated for what it was and preferred, in many cases, to brands of more, shall we say, ‘youthful’ appeal; in much the same way that some people just prefer a steak and kidney pudding to a saffron risotto with scallops and white truffle.

Now, DAKS is a brand on a diet. Gone is the steak and kidney, but it’s certainly not forgotten. The overall look is still very English; some elements late Victorian to Edwardian (indeed some of the more avant-garde ensembles have a ’green carnation’ aura to them) others are more reminiscent of the 20s and 30s. Some of the chaps you half expect to be holding a well-worn teddy bear in true Seb Flyte fashion, some of them look more like erstwhile companions of Max Beerbohm but the brand message is strong: DAKS is now very serious about design.