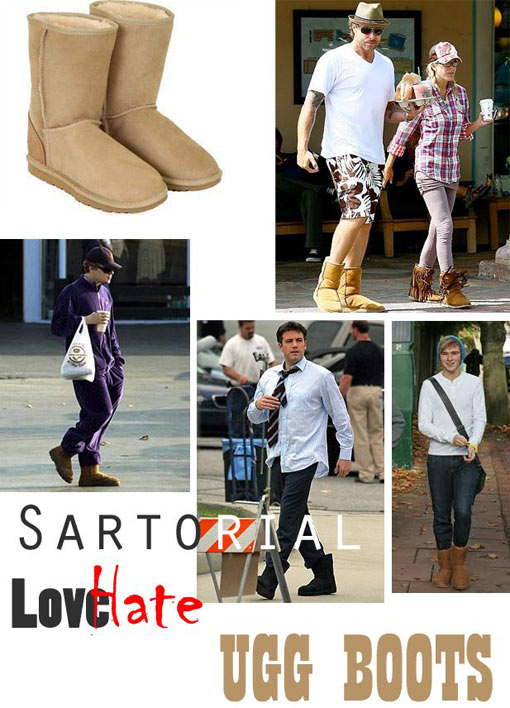 Everyone I know, and possibly everyone I have met, is aware that comfort is not my priority in clothing. It is certainly something I consider; I wouldn’t inflict pain or unease on my body no matter how stylish an item of clothing or footwear might be, but it is an ‘also ran’ of my considerations. To begin with, living in the city precludes the need to base clothing choices on waging a permanent battle with the elements; secondly, comfort has a great deal to do with familiarity rather than an instantaneous feeling – I feel comfortable in clothing that I am used to that is also used to me. Thirdly, physical comfort is no more important than the psychological comfort of wearing something you feel good in; a down-filled puffa jacket would make me feel ridiculous, nullifying any physical effect it has on me.

It should come as no surprise then that I heartily disapprove of a certain menswear craze; Ugg boots. The aptly named boots are a boil of fashion that requires an immediate lance-and-drain. They are inelegant, impractical and irritating. However, for every detractor there appears to be an advocate; “They’re SO comfortable though!” a friend said, with a hint of embarrassment in their quiet voice.

Comfortable they probably are; sensible they are not. These iconic sheepskin boots, though a unisex item, were always seen as a female fashion trend, catalysed by celebrities such as Kate Hudson, Cameron Diaz and Paris Hilton who were pictured stumbling around Los Angeles boulevards, Starbucks in hand, bug-eyed sunglasses-on-head going from boutique to Bentley in unsightly, unstructured Australian farm-hand footwear.

Since those days, they have been adopted by the slummy-Sloane set, street-corner teenagers and haggard, harsh-voiced pram-pushers; and now they are being worn by men.

In one way I am rather glad; without men adopting the fashion, it would scarcely have been relevant to devote column space on this site to something worn exclusively by women. However, it is also distressing that more of the humans that prowl this planet have latched on to this preposterous footwear. One of the major problems I have with them is that they are worn as though they are proper shoes; the wearer strides around in them with the self-confidence of a well-dressed boulevardier and yet the reason they supply for tarnishing the scene in such a manner is guilty comfort; they are fully aware that they are not the most attractive shoe, they know they are not practical in the rain and they know they are actually better suited to a ski chalet or a particularly cold bedroom but they cannot resist the warm and squishy lambswool between their toes. They have to have it; “…it’s, like, a drug.”