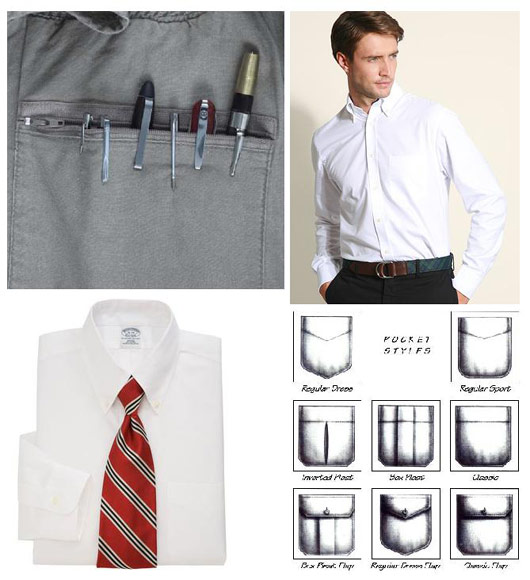 I’ve recently been wrestling with the issue of shirt pockets.

There does seem to be something of a transatlantic divide on this issue. Reading most of the forum chit chat, Uncle Sam’s men seem in the majority to favour breast pockets, while Europeans and particularly Englishmen abstain. Like many things in the world of menswear there is a certain amount of silliness and snobbery to endure on the issue – in the main focussed against those that favour the pocket.

There appears to be no hard and fast rule on the matter, although the shirts evolution from its simple linen origin was certainly minus pocket. The innovation of a pocket is widely attributed to Brooks Brothers when they first added one to their button down shirt in 1960s, although the button down itself dates back to 1896. Since Brooks Brothers’ innovation many illustrious British shirt makers have followed suit, despite the hostility, currently placing breast pockets on their single cuff shirts, presumably regarding them as less formal and more sporty.

Personally, I cannot abide pockets on shirts. The first reason, in terms of ready to wear shirts, is I’m yet to find a pocket set at the right level on shirt front. Either too high or too low, too close to the shoulder or too near the waist, the aesthetic has never quite work for me. I’ve also found that they serve no useful purpose. Sunglasses should either be on your face or can just as easily be tucked down the front of the shirt, supported by the second button. Under a jacket it’s pointless to place anything in the pocket as you’ll destroy the lines of your jacket, not to mention the fact you have better suited pockets for carrying kit, in which case what do you need a shirt pocket for? And on a purely aesthetic note, I much prefer the crisp clean look of an uncluttered shirt front in both its formal or casual form.

This directly relates to starting my own label, a project I’m slowly working towards. As I made clear recently, I want to offer a small range of formal and semi-formal shirts. First on the list is a true soft roll collar, button down oxford. Authenticity matters, and given the expectation that such a shirt should have a pocket do I make good on my goal or back my own instincts…