The Youth of Today

“Youth” said Lord Henry Wotton, the chilling cynic of the gothic novel ‘The Picture of Dorian Gray’ “is the one thing worth having.” For a long time, I agreed. However, considering the current state of the economy, the cost of a university education and the dearth of job opportunities, I am rather relieved that I, in my late twenties, am no longer part of this nation’s unfortunate youth. For those that are; struggling to make their way in an overcrowded, expensive and often uninspiring world; working in menial jobs for which they are absurdly overqualified, I have a great deal of compassion. I myself didn’t have an easy route into anything. I know how it feels to be ignored, rejected, underpaid and overworked; many others do too. As the youth struggle to keep up with the shadow of their ideal, it is difficult for the fortunate and the happily settled to understand the pressures that are faced and the strict budgets on which many exist.

I was contacted by a young reader of my blog who was gratified to see that someone was championing the use of sartorial components from the high street rather than tailors or designers “which, let’s be honest, cater to a financially privileged few.” After all, though it may be that Savile Row aficionados are correct; that you can find no better cut of suit in the world, that it is worth saving a considerable sum to purchase such a suit, no matter how hard the ambitious young might work, no matter how diligently they save, necessary expenses block the Yellow Brick Road to Henry Poole et al, and even rule out many of the less expensive City tailors. I wrote to the young reader and asked him his budget. His response provoked considerable shock; he had expected to spend no more than £100 which, bearing in mind his expectations and aesthetic discernment, was a hopeless sum of money. 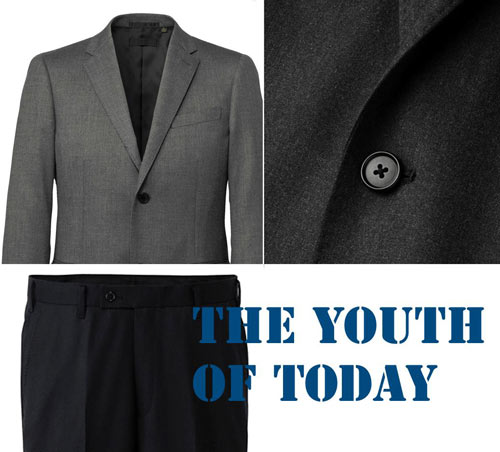 However, I viewed his case sympathetically. I saw a little of myself in this ambitious and optimistic 19 year old, with dreams of management and responsibility. The suit was to be worn to several interviews for unpaid internships, it needed to fit and he was adamant that the trousers should be the correct length. “The suit” he considered “would give me confidence and make them confident about me.” His attitude was exactly the right one; his suit needed to look like it cost more than it did and he was sure, since he was of the opinion that I had managed to do so with ensembles of my own, adding a few accessories would ‘upgrade’ the look. The most important thing, at least as far as his father was concerned, was that he was not to buy any “funny polyester” suit; it needed to be made of wool.

With such parameters, I would normally have responded that unless a vintage suit was purchased – undesirable to this young gentleman – the ask was impossible for such a low sum of money. However, I decided to pay a visit to three retailers that I knew had previously offered well-cut, wool or wool-rich suits for excellent value; Zara, H&M and Uniqlo. First off the list, as I expected, was Zara; the suit jackets alone cost £119 which, though good value, was well over budget. Next, with low expectations, I visited H&M; the Swedish store had been rather thin on suits recently and I did not expect to find anything made of wool. I actually found a wonderful light grey flannel two-piece for £115; the jacket was £80 and the trousers £35. The material was beautifully soft though, unfortunately, it was not ‘all wool’ as had been requested; 20% of the fabric was polyamide. Marking that as an outside option, I rested all my hopes on the last stop; Uniqlo.

Having bought a few flannel jackets there recently, I was well aware that the store offered great value but was still considerably impressed that a 98% Tasmanian Wool suit could be had for £110. Available in houndstooth, navy blue, light and dark grey, the soft flannel material would be the perfect foil for a soft white or blue shirt and a rich, silk pocket square. Though slightly over budget, I couldn’t resist making the recommendation and, feeling the soft wool between my fingers, couldn’t resist giving it a go myself. Slim fit, with a softer shoulder, the ‘suit’ is actually sold as matching jacket and trousers.

For something that costs so little, it is remarkably elegant and is very flattering, though the trousers – all are 34” length – will need adjusting. The material itself is substantial, subtle and timeless, unlike the sheeny-shiny, shoot-peas-through-them suits that so many seem to be fond of. It might not be the Huntsman suit worn by a middle-aged, grinning CEO but for an earnest young man on a budget, this purchase, with a little trouser-tailoring that will cost him another £15, is bound to impress. 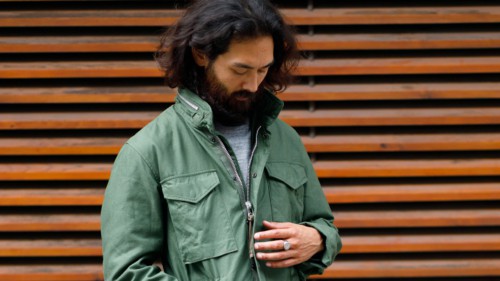