Why the Fuss? SuperDry 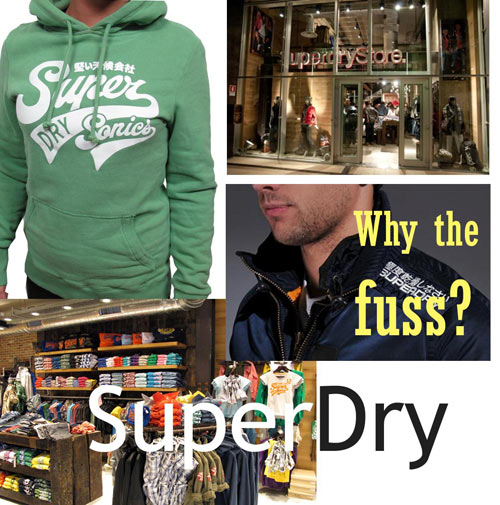 Vigo Street was once one of my favourite thoroughfares; snaking from my favoured shopping boulevard, Regent Street, brushing the southern tip of Savile Row and turning into Burlington Gardens. It is a shortcut from the hushed luxury of Old Bond Street to the buzz of Soho; a walkway that takes in Ede & Ravenscroft, Gieves & Hawkes, Reiss and Austin Reed, as well as a delightfully empty Starbucks that looked down Sackville Street; perfect for a recuperating cupper on a weekend afternoon.

Now the Starbucks is no longer a secret, having been discovered by hordes of Abercrombie & Fitch disciples who crowd the narrow pavements outside, traipse carelessly in the path of beeping taxis and sit on the pavement in large groups at the back entrance to the Royal Academy. The access this street once provided was a soothing relief to the worsening bustle of the capital’s grandest high street; now, it is but a tributary of the same river of humanity.

I was dismayed to learn earlier on this year, not only that Abercrombie & Fitch have decided to prolong their incongruous imposition on Burlington Gardens, but that another brand of questionable value and inestimable hype were taking over Austin Reed’s lease at 103-113 Regent Street.

SuperDry is the most notable brand of the FTSE 250 listed SuperGroup plc, founded in the mid 1980s by entrepreneur Julian Dunkerton. SuperDry itself is a Noughties creation. Once a small, Covent Garden shop, it mushroomed into a wildly popular cult clothing brand when celebrities such as David Beckham were considered fans of the merchandise. Now, it is barging in on one of the ultra-prime spots on Regent Street into a building that has housed smart clothing for gentlemen since 1911; when the Ottoman Sultans were still on the throne and the doomed RMS Titanic was awaiting sea trials.

Like Abercrombie, SuperDry is representative of this new era; an era of cult and television-fuelled celebrity, of relentless ‘brand shopping’ and emblazoned logos; an era when the fashion of youth prevails, turning the age old story of ‘dressing like your father’ on its head.

Though SuperDry affects to connect itself to Japan through the use of the abbreviation JPN and the inclusion of Japanese characters in the logo, it has nothing to do with the country at all, except in ‘design’. In fact, it has even been suggested that the characters themselves are nonsensical; “…a bad attempt at translating ‘Do SuperDry’ into Japanese – presumably achieved with the help of a dictionary rather than by anyone with knowledge of the language…their customer base [didn’t] notice that they were essentially gibberish.”

To be fair, this is no different to the hogwash that is written across a lot of clothing – ‘authentic’ and ‘genuine’ are two of the most common examples – and the offenders are legion; Tommy Hilfiger, Ralph Lauren, Abercrombie & Fitch to name but a few.

However I am not that certain that with SuperDry, the shopper is necessarily buying into a particular aesthetic; with Ralph Lauren it is luxe Americana and English classics; with Tommy Hilfiger it is American preppy and Abercrombie sell the aesthetic, however unappealing, of collegiate casual. SuperDry are a hotchpotch, as the website states, of “…Japanese design influences and vintage Americana style which has won over fans from all over the world and a growing celebrity following.”

What is SuperDry’s aesthetic? A teenager’s bedroom floor? As far as I can see, this ‘design’ consists of bland windcheaters, nylon rainjackets, hoodies, sweatshirts and jeans; the only product difference between SuperDry and H&M’s Divided brand and, the dreck end of Inditex, ‘Pull and Bear’, is the retail price. SuperDry have managed to retain the glitter and gilt that the patronage of celebrity titans such as Leonardo DiCaprio affords.

People love these brands because they allow them to live their lives vicariously; a little bit of SuperDry is like having a fraction of a celebrity lifestyle. They have the cheap clothing too but they need a little bit of a brand that people fuss about to make themselves feel good. SuperDry is riding this wave and right now, the water is warm and frothy and tastes like The X Factor. But how long will it be before the water turns cold? Before the curtain is lifted and the Red Bull-style brilliance of its branding fails? Austin Reed lasted nearly a century at 103-113; I wonder how long SuperDry will last.