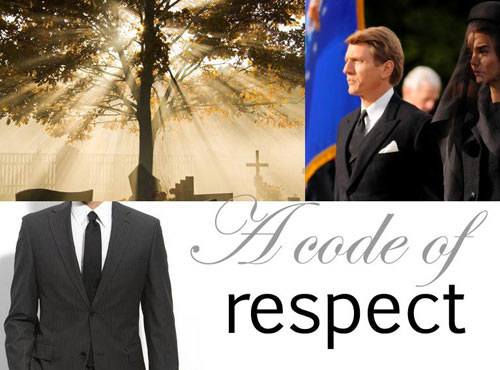 The subject of funerals may not exactly be the most uplifting diversion on a wet afternoon but a recent conversation with an acquaintance, regarding a funeral I attended, was so pertinent to matters of sartorial etiquette that I simply had to pen my thoughts and share them with readers. For it was when my partner in conversation had asked me “So, what do you…what do you wear to a funeral? A tailcoat or something?” that I decided that this important aspect of occasion dressing – however superficial such considerations may be in the circumstances – needed coverage, as it was evident that the entirely separate approaches of ‘dressing up’ and ‘dressing for the event’ often get muddled.

One misconception about funerals is that they are another religious formal event, thereby requiring those who adhere to the code of morning dress for weddings and other events to wear the altered version; black waistcoat, black cravat or tie. While technically correct, the sentiment of dressing in this manner can so often be misinterpreted, and anyone dressed like this at a funeral may be taken for an employee of the funeral directors but, far worse, could also be the subject of anger for those closest to the departed, who may view such attire as an attempt at levity. So little is it seen, that the wearer would stick out like a sore thumb; for all the wrong reasons. Even at state funerals, the percentage of people dressed in this manner is very small indeed.

My response to the question was therefore to the negative; I did not wear a tailcoat. I could have worn one, as I do possess a black waistcoat, but the idea of dressing in this traditional but rarely-seen manner did not seem right. When a wedding invitation states ‘Suits’, I would normally go in a suit or at least check with the groom for his approval on morning dress. Funerals almost never stipulate the form of dress. The expectation is that someone would dress with respect for the mourned, not for themselves. As occasions, they are intensely emotional and, by their very nature, sombre; whatever might be perceived as being ‘costume’ should be treated with great caution.

My advice to anyone attending any funeral – unless they have been instructed or requested to wear tails – is to wear a dark, patternless suit. It does not have to be black – in fact, a dark grey suit is a much better option – but it should not be striped or checked. The shirt should be plain white and the tie should be black; though ties are an adornment, as a mark of respect, they should be worn.

As a rule, I prefer to dress for myself and my own idea of style and elegance; funerals are the exception, the one occasion I defer to the general attire of my fellow attendees, tone down the image and remember the departed with dignity.