Short And Tight. But What’s Next? 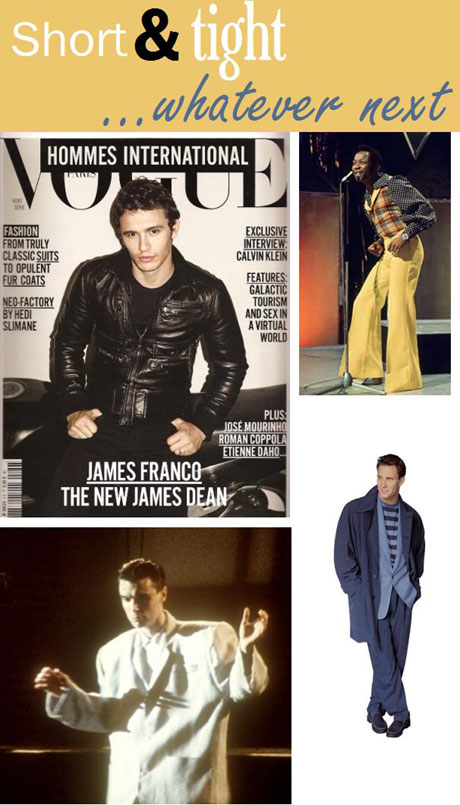 One of the most interesting aspects of men’s clothing is that our tolerance for trends is actually greater than we’d like to admit. Although the writing here at Mensflair is largely a sober contrast to the histrionic gushing on fashion-following forums, a rejection of faddism and label-worship, there are essential, and unavoidable, elements of trend that are little acknowledged. If someone chooses to tell me that I am fashionable or that I simply “must know about fashion” merely because I take an extraordinary interest in clothes, I bristle with intolerance; I generally believe, rather arrogantly and naively, that I am actually unfashionable. I have been wearing, I point out, bow ties before they became a season trend. I also say that my style is too antiquated to possibly be fashionable.

However, what am I avoiding in this analysis? Why am I paying so much attention to minor detail when the fundamental, substantial issues, the sort of things that are only glaringly obvious to other people, are telling a different story?

My jackets, much as I like to believe they are of a ‘classic’ and ‘timeless’ style are a product of recent fashion. Most of them are actually rather short and, in comparison with the prevailing style of other decades, rather tightly fitting. I was bought suits ‘of a fashion’ in the 1990s by classical loving parents that offered the typical Nineties aesthetic; length, little definition in the waist and much broader shoulders. They are items that claim to be the same size, and often smaller, than the items I now wear and yet they feel two sizes too large. When I try these old items on, they not only look dated but they also look wrong; much as skinny ties began to look wrong in the 1970s, and flares began to wrong in the 1980s and shoulder pads began to look wrong in the 1990s.

Fashion is everywhere and affects virtually everything; it beats away your acceptance of trend peculiarities, enforces you to accept the new as the norm and makes you revile what you once loved.

Another case in point is the slimness of trousers. Leaving aside skinny jeans, which I do wear and (perhaps naively) believe are more timeless and adaptable than ‘baggy’ jeans, fashion has done more to our perceptions and understanding of our lower half than we would care to acknowledge. How many times have straight fit, slim trousers been advocated on this site? And how much credit is fashion afforded for this? Even in the tailoring world, a world that does not need to follow the glittering, market-driven, paparazzi influence of fashion, customers are frequently told “Well, gentlemen are wearing their trousers much slimmer these days, sir.”

When I tried on a pair of old Iceberg jeans that were, at the time, comparatively slim, I saw a trouser I would now consider too large. The waist was fine – ten years have not added much in the way of ‘excess’ to my waistline – but the overall style of the jeans was, to this contemporary eye, very confusing. Before I put them on, I remembered, vaguely, the last time I wore them. I remembered the shoes I wore them with, the restaurant I wore them to, the girl whose hand I held as we strolled along the street; they were the height of fashion and I had been teased for them being ‘tight’ by less fashion-conscious chums.

Of course, times change: the friends change, the girl changed and even the street changed. I had expected the same jeans 10 years and 100 fashion-fads later. As a garment, they were unrecognisable to me; two nil to fashion.