But The British Are No Better… 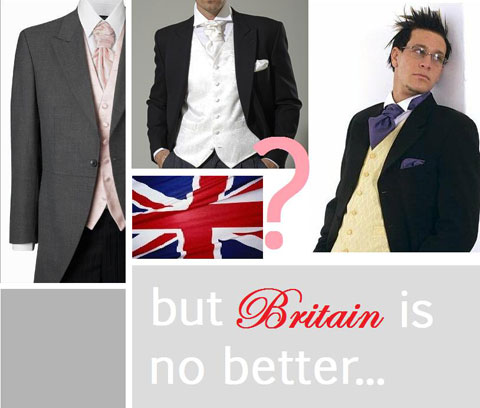 At the beginning of June I wrote an across-the-pond view of North American wedding wear customs. I wrote of the ‘contradiction’ of the wedding couple’s attire, and how ‘inappropriate’ it was to wear evening clothing to morning and afternoon ceremonies.

My thoughts appeared to resonate with some of the readers: one remarked that the clothing choice was partly to do with the ‘utilitarian’ theory; that a wedding requires a ‘dressed up’ choice and black tie = dressed up. Another commented that the origins of the American nation (“We are almost all descended from the European lower class”) are partly to blame.

I have thought that, on reflection, I have been a little bit rough on this point. I do not retract my view that black tie at daytime weddings looks wrong to me but I do feel that one who resides in a glass house should not throw such stones. As immaculate and appropriate as some are attired in the UK for a wedding, a huge number of the ceremonies and receptions that take place in churches and marquees, between Land’s End and John o’Groats, are a far cry from the image of sartorial perfection that this nation often likes to portray.

The average British wedding is utterly depressing. The people are generally wonderful but the ghastly clothing that the seemingly uncaring grooms’ parties choose to don is astonishingly awful. Why is this? For what possible reason could a nation of such history in cut and cloth be clothed in such cardboard-waistcoats, synthetic tailcoats, vomit-inducing matching cravats and, usually, inappropriate accessories and footwear? Wedding hire. The sad fact of the matter is, most people rent their wedding clothing and while this is perfectly acceptable, and by no means a modern practice, it does mean that for one of the most formal occasions in your life, a major turning point and a new beginning, you’ll be wearing the most generic of the generic; a suit made for a market, not for a man.

How many times has the wedding-going Brit seen that lilac, burgundy or golden cravat? That matching brocade waistcoat or those overly long trousers with one too many breaks? I for one have seen these things too often. It’s hardly surprising, given Moss Bros. market dominance, that on wedding days churchyards and chapels up and down the country are littered with their coats, trousers, waistcoats and accessories.

However it is not just ubiquity which I find rather distasteful. My biggest gripe with this practice is that the aesthetics are entirely off. The jackets are not only made for someone in your chest size category but usually for men of varying heights, arm sizes and shoulder width. Even on the photogenic models in the catalogue, on whom a mankini would look partially flattering, they look utterly rigid and shapeless.

The ‘cardboard’ waistcoats are exactly that; as stiff as a board. The pattern is almost always a woven paisley or brocade – something akin to grandmother’s bedroom curtains – and the sheen is breathtakingly vulgar. The cravat, now so hackneyed, is no daub of elegance but a blob of tack that looks more like a used napkin. A pocket square that matches the cravat and the waistcoat in colour and texture sits in a contrived, starched fashion in the breast pocket. The worst thing about such a common combination? Better options are available at the renters. Although there is great variety available, it seems that most wedding parties in Great Britain end up choosing the same damn thing.

If I were advising a groom and his party on attire I would instruct him to hire one of the classic (non-Edwardian) cutaway morning coats, if he does not wish to purchase his own, and nothing else. He should always purchase his own trousers (cut to his length), his own waistcoat – single or double breasted – and his own tie or Ascot (which doesn’t have to be plain) and pocket square.

The waistcoat should not be of a high break or have any woven pattern. Dove grey is the most classic and masculine choice. The groom should also differ slightly from others in his party; a different tie, pocket square or colour of waistcoat would make him stand out from the rest. Finally, it is likely that he and his party possess better shirts in their own wardrobes than the wing-collared things they try and foist at the renters; always a turn down collar for ties and always a wing collar for Ascots.