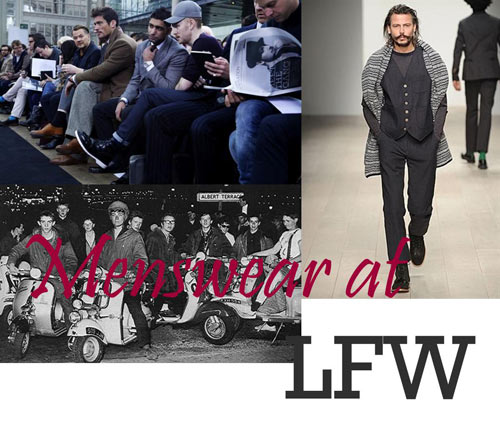 Another fashion week has come and gone in London, although you’d be forgiven if you failed to take any notice. It’s a fairly insignificant event in commercial fashion’s calendar and, although a potentially life-changing one for the young designers on show, a little too raw and ‘edgy’ (fashion’s favourite word) to conjure anything more than bland curiosity.

However, there was much fuss being made of menswear this year. So much so, that I decided to take a look and understand why exactly this was. Sadly, instead of being pleasantly surprised, I looked blankly at a morose army of gaunt youths in ‘design’ double breasted jackets, skinny trousers and unspeakably large shoes; not only was it very similar to the minimalist oddness that has prevailed for the last five or six years, it was also lacking in any aesthetic appeal.

What was it that the designers were representing? What heritage were they drawing on? It all seemed to be a confused mess of items that, like many menswear shows, will never reach the wardrobes of the stylish and sensible because they have nothing to recommend in that regard. That wet dream of fashion’s insular creativity, being ‘on the edge’, may be the industry’s driving force but it is also the reason why it never really succeeds in the man’s world. Though I myself can be partial to novelty, a lot of men consider following fashion to any degree to be a labour of Herculean proportions.

Some clues as to the mind of the designers shed some light on their sources of inspiration. Wayne Hemingway, a painfully naïve proponent of British fashion, is about 10 years too late with his proclamations of ‘Cool Britannia’, and particularly his misguided notion that Chinese and Russian tourists flock here because of Britain’s connection with ‘cool’; “They flock here for the Olympics this year and the Queen’s diamond jubilee…but they also flock here because now Britain is seen as the centre of cool.” Er, really?

Listening to Hemingway, you’d think Britain, and more importantly, London’s connections with male fashion and style only go back as far as the 1950s; “…through rockabilly, through mods, through punk and all of that…” You’d also get the idea that Britain’s ideas of ‘cool’ have never changed, and that socially irreverent movements were all we had to offer in the long history of our island nation. The real value in fashion movements is deciphering whether they last, to any extent; if they don’t, and their appeal does not broaden beyond subculture, the movement has failed.

Far more valuable, and long lasting, are the uncelebrated periods before the mid-twentieth century, when British tailoring affected the way virtually every man in the world was to dress – and dresses still. These eras have their own subcultures now, antique dandies who dress as Victorians, Edwardians and twenties gangsters. What’s more, there are countless brands who owe their very brand aesthetics to the origins of these less vaunted fashion ‘movements’ – titans like Ralph Lauren and Tommy Hilfiger; where would Lauren be without tweed, the Duke of Windsor’s tailor or the wardrobe of a fading aristocrat? Hilfiger, though ostensibly more all-American, still owes the trademark preppy-smartness to the propriety of British tailoring.

The fashion movements that still matter – chiefly because they serve more than a music-subculture or a generation of rebellious teenagers – tend not to be the ones that Hemingway and his ilk have any inkling of. Fashion so strongly believes it is part of the vanguard of wider social movements that it chooses to ignore, or fails to recognise, real heritage, even when it is staring them in the face.