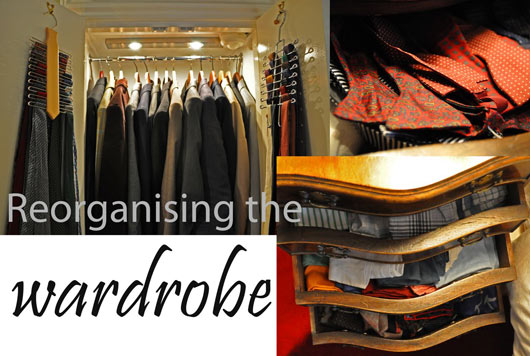 One of the most frequent questions I am asked about my clothing; “Where on earth do I fit it all?” Work colleagues, friends, visitors to my blog and even my family wonder that I can be properly storing what appears to them to be a vast amount of clothing. Do I use vaccum bags for out of season clothing? Is it all mothballed in a warehouse? Where on earth do I put my ties? One person, asking me how many I possessed, stated their own level of ownership and problems with storage; “You must have fifty or sixty ties or something?” they asked. Where did it all go? Did I possess vast, Victorian wardrobes? Was my bedroom simply a giant clothing cupboard with a bed in it?

Collectors always have problems with storage, unless the objects of their collection are small enough not to cause concerns over general space, as is the case with postage stamps. However, collecting is not a question of filling a finite amount of space; a collector of gemstones does not seek to fill one velvet-lined box. Collecting is often a never ending hobby that when it gets to excessive levels looks rather like hoarding and can often be considered by outsiders to be an addiction. The problem with clothing is that it is not something that is kept in a box to be kept for posterity; it needs to be kept well in order for it to be fit for wear. This is why I believe it is not healthy to have an entirely elastic wardrobe. Unless you own vast warehouses in which to store the stuff, there is always a limit to a gentleman’s own sartorial holdings.

However, I believe that whatever space a gentleman has available, he should use efficiently. From the pictures you can see the setup of my wardrobe; suits, jackets, waistcoats and trousers are hung and the ties are hung on organisers which are hooked onto the inside of the doors. They had originally been carefully folded into drawers but this was not a sensible storage method for a number of reasons; firstly, accessing a tie was far more difficult as drawers have to be rifled through and secondly, some ties became damaged from the overflowing drawers by snagging against the wood. It would have been more practical to rid myself of the ties, but many of them have been handed down and I was reluctant to let them go, however infrequently I wear them.

The drawers they were stored in now contain my collection of pocket squares. They are organised into pattern types; plain, checked and ‘florals.’ Again this makes accessing the squares easier than if they were jumbled up in a box together which is ideal for both the man in a hurry who knows exactly what he is looking for or the man who has a special event to attend and wishes to experiment with something untried. Reorganising my accessories in this way has improved my dressing experience enormously and has also meant the objects are all in a wearable condition.

Admittedly, I am currently fortunate in my living circumstances that I do not have to share bedroom storage with another; there will be many who have to split their space with a spouse or, as in the case of some I know, with their children. There is no doubt that my ‘empire of wardrobes’ will one day succumb to the fate of all empires but when that does happen, I should hope I am prepared for it.