A Question Of Attraction 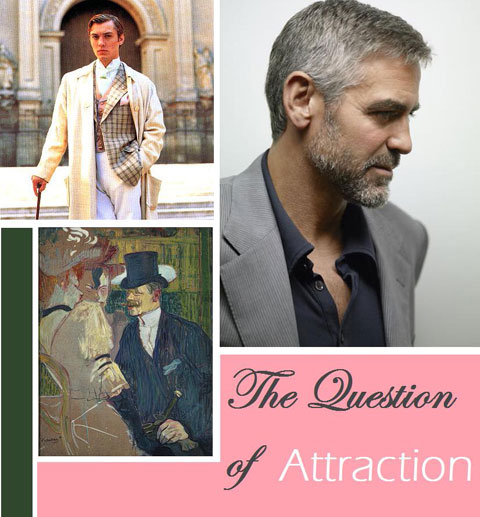 The way in which we dress invariably has an impact on the way we are perceived by members of the attracting sex. From my perspective, a woman I perceive to be well-dressed would naturally attract more attention, even though she may not be the most attractive woman in the room; being ‘well-dressed’ is unusual. It is a sign of self-assuredness and quality of mind. However, I often wonder how important it is for my contemporaries to exaggerate or understate their own personal style in order to retain the attraction of those they wish to attract.

If I were to ask certain friends of mine whether this was a serious consideration when shopping for clothes, there would be a mixture of responses. One response would ridicule the idea of shopping to please another person. This scoff would be further qualified with suggestions that men should identify first and foremost with themselves – if the women aren’t interested, are shocked or put off, so be it.

Another response would carry a certain caution; that some of my friends are not willing to appear ridiculous, though they would dearly love to express themselves in the clothing they dream of. There is in these respondents an itching desire to be free from the convention of the day but it is a tiny flame, easily doused by the waves of insecurity. They also confess to a strange comfort in anonymity.

Then there are those who would respond, quite honestly, that they often plead with girls, generally ones they are not attracted to, to go shopping with them in order that they do not select items which would compromise the image they wish to project. They are not always shy in nature. They are simply cautious. They tend to enjoy being single, have a varied social circle and, most importantly, consider sexual attraction the most important pastime in their lives.

Some of them have no interest in clothing at all. The majority however have come to recognise the importance of ‘standing out’ when playing the field. However, there are many things they just will not do. One of my friends asked me why I wear bow ties. I informed him it was because I liked wearing them. He responded that he could never wear one unless it was part of his evening wear. Vaguely intrigued by his commonplace response I asked him why: “Because” he said “I’d look like a tit!”

Looking as ‘different’ as that is generally considered by men to be a non-starter in the attraction department, especially for heterosexual men. Indeed, even women can be rather scornful and abusive about men who they accuse of ‘trying too hard.’ Though they may quietly applaud the bravery of a man of idiosyncratic style, they generally have an asexual response to extraordinarily well-dressed men.

When I proffered photographic examples to some women (three in their twenties, two in their forties) recently for their opinions on the approachability and attractiveness of the gentlemen concerned, the immaculately and idiosyncratically dressed men – aside from Johnny Depp – received very low responses for reasons of ‘stiffness’ and ‘utter absence of sexual appeal.’ The moderately well-dressed gentlemen – jacket, trousers/jeans, no tie, no pocket square or other accessories – received the highest response. The reasons given were ‘ease of dress’, ‘avoidance of fuss’ and consequently, ‘strong sexual connection.’ The badly dressed men didn’t score as well on the whole but they often scored far higher than the immaculately dressed men, even amongst the older women, for reasons of ‘brazen sexuality’ and ‘gruff masculinity.’

When I suggested to these female respondents that it was preposterous of women to moan about badly dressed men when they themselves credited them far higher than those who practice clothing perfection, they agreed: it is preposterous, they said, and it makes absolutely no sense that somehow their sexual mind should prefer scruff over splendour. However, they suggested it has far more to do with current perceptions of fashion and style – not to mention the fact that they are but a tiny sample “I bet loads of girls” one of them said “would think a guy in a bow tie was hot as hell…” – and that there are likely to be perfect partners for every category of gentlemen presented. Lastly, I asked them to state, in their experience, taking into account all the possible views of their sex what they considered the ‘safest’ route to take to secure attractions. Without hesitation, they all selected the moderately well-dressed gentlemen.

The irony of all this is that gentlemen who fall into the category of the ‘immaculate’ might very well tone down their more eccentric ensembles when consorting with single women – and, when fully ensconced in a warm and loving relationship, take the first opportunity to express who they really are; “Honey! I’m breaking out the bow tie…”