A Stylish Movie: To Catch A Thief 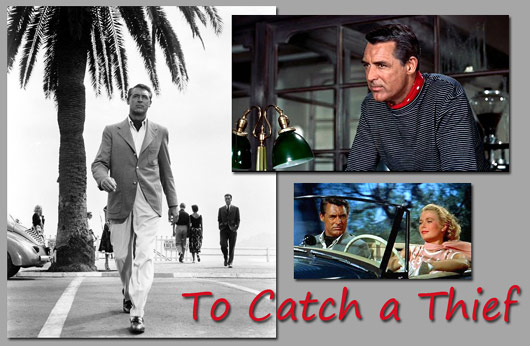 To Catch a Thief (1955) is an Alfred Hitchcock classic starring Cary Grant and Grace Kelly. Grant plays the roll of John Robie, a jewel thief nicknamed “The Cat” who has retired to the French Riviera. Following a series of jewel thefts in the area, Robie becomes the prime suspect and must prove his innocence by catching the thief.

To Catch a Thief is full of great clothing. Even the cops wear double-breasted suits. The movie was nominated for the 1955 Academy Award for costume design. While watching the movie, I paid particular attention to Grant’s wardrobe.

The movie opens with Grant in a round-necked pullover with blue and white horizontal stripes, a red and white polka dot silk around his throat, a pair of gray wool pleated trousers, brown loafers and light gray socks. I noticed a minor continuity error a few scenes later; Grant was in the same outfit sans socks.

Later in the movie Grants wears an outfit with similar elements. He pairs a heather-gray pullover with light-gray pants. The silk at his neck appears to be a paisley pattern of dark fall colors like rust, navy and dark green. His hair is sleek and shiny. Maybe Brylcreem?

One notable scene supports the assertion that a gentleman should carry two handkerchiefs. The first is for display in the jacket’s breast pocket, and the second is for personal hygiene (one for showin’ and one for blowin’). After a passionate kiss between Grant and Grace Kelly, Grant uses a white handkerchief produced from the trouser pocket of his tuxedo to wipe the lipstick from his lips. Meanwhile, a white pocket square appears angled jauntily in the breast pocket of his shawl-collared tuxedo jacket.

In my favorite outfit from the movie, Grant wears a light bluish-gray jacket with patch pockets and gold buttons. Interestingly, the jacket sports only two sleeve buttons. Also of dubious note is the fact that in one scene Grant fastens all three of the jacket’s buttons. The jacket is paired with light gray pants, a white dress shirt with button-down collars, a navy cravat with small white dots, and brown tassel loafers.

For some classic sartorial inspiration I recommend you watch To Catch a Thief.