Down with the Kids 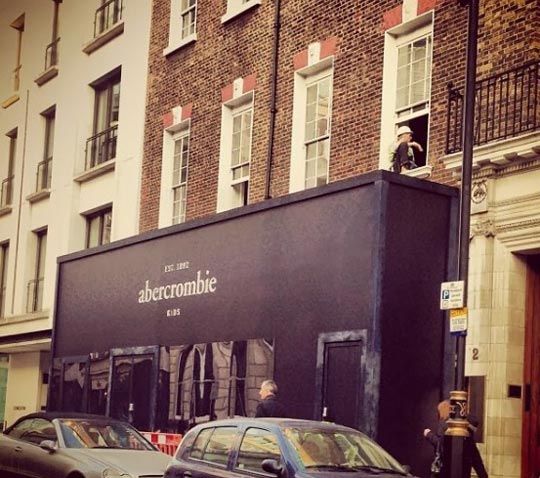 I recently walked past the new Abercrombie & Fitch “Kids” store on Savile Row.

Did you get that?

It’s like being told that there’s a Ladbrokes in Belgrave Square.

However, aside from how monumentally disappointing it is to me that this particular berth is now a reality, it did prompt me to think.

Now that the pavement will be clogged with Bugaboos and the air ever more redolent of Abercrombie’s answer to mustard gas, the question for the Row’s ancient tailoring tenants is simple: are they more relevant, for now and the foreseeable future than the new “noisy neighbours” at No.3?

And yet the majority of men skipping around the very elegant part of the capital I work in don’t seem to be particularly fussed about suits – particularly on Fridays, when they don’t have to be.

Of course, down the Row, you’ll always see well-dressed suited men going to and fro, wearing big lapels with DB waistcoats, tie clips and slick Gaziano & Girling brogues as if the 1960s had never happened.

But walk out into Old Bond Street or onto Regent Street and the suits vanish. Like something out of Lewis Carroll, you wonder whether they ever existed at all as you note that the majority of men who are self-consciously well dressed are wearing separates – trousers (or jeans) and a blazer.

While it’s easier to sit back, observe and bemoan decay, there’s a more practical – and profitable – way for the Row tailors to deal with the changing tastes of London men.

By marketing the full capabilities of tailoring – not just suits.

There is no getting away from the fact that Savile Row is really “Suit Street.” You don’t go down there if you want a pair of jeans or some cotton t-shirts.

But what about a pair of grey wool trousers, or some cotton chinos cut the way you want them, or a chocolate corduroy jacket? And where does one get that perfect, navy overcoat for winter?

“We make everything really” one of the Row’s tailors recently told me, rather sorrowfully “but I don’t think people really want much else from us besides a suit.”

Really? The same people wandering into Paul Smith, Ralph Lauren and Cucinelli? What are they looking for in these emporiums then? Chicken breasts?

The changing tastes of fashion should hold no fear for the Row. They once helped create fashion, of course, but they are often resistant to its extremes. However, that doesn’t mean they haven’t adapted. After all, few were forcing their customers into frock coats after the First World War.

For those with the resources, a bespoke tailor is almost the first and only port of call for those in the know. However, I have often taken friends around to peruse swatch books for them to express incredulity at the possibilities available: “What? Bespoke moleskin trousers? Can they do that? Really?”

A more casual uniform is not necessarily a cheaper uniform. After all, men are spending many hundreds on non-bespoke “designer” alternatives. They have the resources and the will. What they don’t have, unlike women, is much of an imagination.

Generally, men need to be fed information about what is possible – almost exhaustively – otherwise they will never ask. It sounds like I am being uncharitable to my own sex but I cannot conceive of a more flattering manner of expression.

Ironically, Abercrombie do have an imagination.

Which other lifestyle brand could have the breathtakingly arrogant fantasy that their overpriced, mass-produced nappies belong on the same street as Huntsman, Henry Poole & Maurice Sedwell?