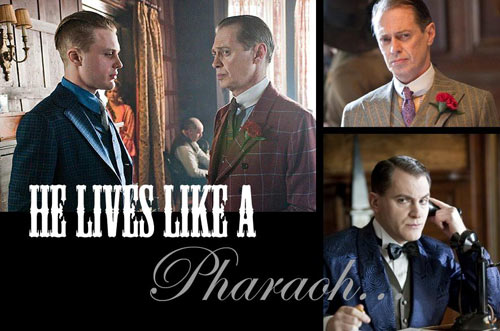 I am not much of a fan of television. Most of it is weak, immature entertainment inspired by the very worst elements in society. However, sometimes the formula works exceedingly well and the effect is powerful and enduring.

I approached Boardwalk Empire with caution, as it had been much hyped and ballyhooed; whenever I buy into hype, I am invariably disappointed. However, even allowing for a dash of hype, I have been thoroughly impressed with the series. American readers may glance at their calendars and wonder why it has taken so long for me to say this, as the series first hit screens stateside two years ago, but little old England is well behind with HBO releases.

The most remarkable thing about the costumes is not just how accurate they are to the period – people who think Prohibition gangsters wore shiny white ties and black shirts, take note – but also how vivid and beautiful they are. The most delicious ensembles belong to Steve Buscemi’s character, Nucky Thompson who epitomises the sort of mythical powermonger who dines at the same table as politicians and hoodlums, who lives in luxury hotels and exudes an air of isolation and quiet sadness; the life, as described by a federal agent, of “…a pharaoh. The entire eighth floor of the Ritz, all at the public’s expense. Grand furniture, oil paintings, tailored suits, drives a Rolls-Royce too. At least his chauffeur does. He’s as corrupt as the day is long.”

Corrupt he might be but he contributes, along with a superb supporting cast, to a gorgeous piece of television. If anything, the cast is too well-dressed; the colour combinations, though certainly feasible for the period, are too perfect. John A. Dunn, who brought slim ties and thin lapels back into fashion through Mad Men, has achieved for 1920s what he achieved for the 1960s; a stunning interpretation of period glamour that turns what were everyday fashions for ordinary men into dandified ensembles of style mavens. Am I disappointed? Not a bit, but it is difficult to admire the glory of the costumes without reserving a thought for the real life characters that inspired it.

As the sartorial highlight, Nucky’s costumes work hard for their screen time; beautiful heavy-weight suits in unusual colours, sometimes with garish colouring – Nucky is certainly a bit of a ‘dude’ in that respect – pin-collar shirts with contrasting collar and cuffs in a surprising array of colours (even yellow and orange make an appearance) and a mixture of subtly patterned and bolder ties in bright blues, greens, reds and yellows. Indeed, I would not be surprised if Mr Dunn credited a vintage candy store for some of the ensembles on display. Nucky’s finishing touch is a ubiquitous red carnation that he wears pinned against his lapel, rather than tucked through his buttonhole; an idiosyncrasy that lends charm to his character.

If there was a tonic against the plain-tie, white-shirt, dark suit monotony that has taken over, I believe we have found it.