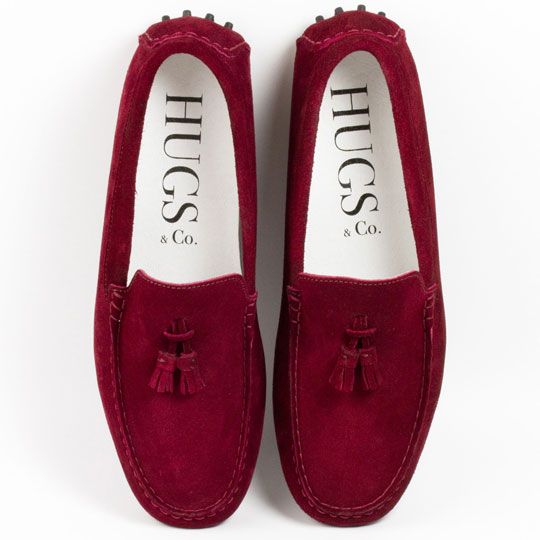 I was originally introduced to Hugs & Co by my colleague Justin FitzPatrick of The Shoe Snob and if Justin recommends a footwear brand, I don’t hesitate to investigate.  Hugs & Co is a British born label offering suede penny loafer/drivers and now offering suede tasseled loafers/drivers since 2012.  I originally spoke with Hugo back when they only offered penny loafers and discussed his upcoming product. He mentioned the addition of more colors and tassels.  The wait was worth it.

Hugo was generous enough to send me a pair of burgundy suede tassel loafers/drivers.  I combine loafers and drivers in this case because they seem to be a hybrid of the two.  If there was a full leather or rubber sole than they would squarely be loafers—although there is nothing square about them.  However, they come with the classic pebbled sole which puts them in the driver’s seat so to speak. 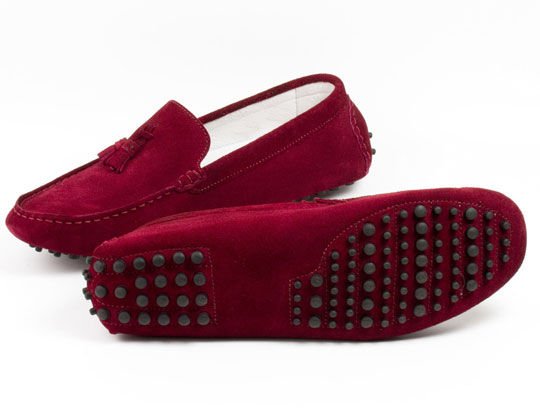 I like Hugs & Co because they know their place and are not trying to compete the high luxury makers such as Tod’s or Car Shoe.  Instead they offer a straight forward product in quality construction at an attractive price point.

All Hugs & Co footwear is made in Portugal, a reputable shoe manufacturing country, producing for high street as well as boutique retailers.  While they are made in Portugal everything else about them is genuinely British:  Only offered in UK sizes and sold at 65 pounds. At less than 100 dollars they are affordable alternative to Tod’s without missing any style points.

I haven’t had much success with ordering overseas footwear recently.  They all seem to run a bit big.  This time I sized down.  I’d rather have my shoes a bit snug than too big. This principle does not apply to 90% of items of clothing but shoes can be worn in and stretched without much damage to the structure. Most other garments cannot be.

Speaking of structure the Hugs and Co product feels solid and substantial although there is not much to the shoe.  I’ve worn several drivers/loafers in my day and most of them I no longer own because they succumbed to wear and tear and became misshapen.  Only time will tell with Hugs & Co.

For our readers and admirers Hugo of Hugs & Co has graciously offered a %15 percent discount.  Just use code ImageGranted at checkout and you’ll be taken care of.