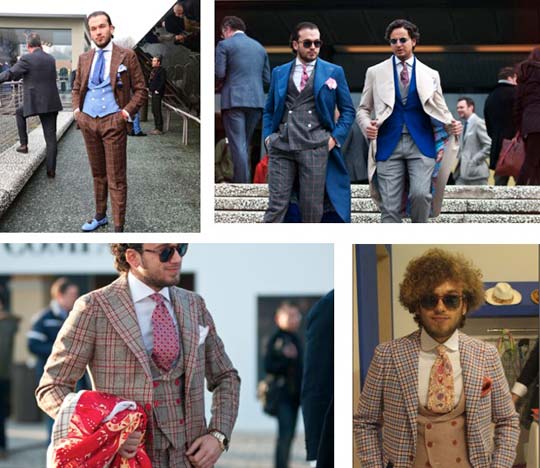 Of all the Pitti Peacocks, Manuel Vanni is one of the most resplendent, and certainly one of the most controversial. His plumage is outrageous, fearless and full of contradiction; mad but coordinated, clownish but cool. After all, it takes something pretty special to be gawped at by everyone in Florence and there is no doubt that Vanni seems to enjoy the attention. However, there are those who consider his ensembles to be nothing more than plumage for the sake of plumage, that his dandyism is utterly out of control and verging on the vulgar.

It will be unsurprising to all that Vanni does not consider there to be any rules to dressing. It will be utterly shocking to some that he considers avoiding exaggeration to be one of the most important things about style. If Vannism isn’t exaggeration, that must make Lapo Elkann some kind of style puritan.

His three-year old brand, Manuel Vanni Spa, is his own personal style. He isn’t like one of those ultra-modernist architects who lives in Georgian splendour. He lives his own work and vice versa. If you see him at Pitti in some scandalous three-piece with suede tasselled loafers, it’s Vanni he is wearing. Unadulterated and unbelievably racy, particularly for a Florence where the well-dressed ‘background’ is largely restricted to navy, grey, brown and white. He is a statement-maker, not a conformist and when the statement is this strong, opinions are greatly divided.

To some, he is a brattish charlatan, a publicity-seeking fop with all the bravery of fine dress but none of the elegance of restraint – or taste. “He’s the reason I don’t look at the Pitti photos any more” one said “it’s so regardez-moi. There are so many characters who have wised up to street style and are just wearing costumes.” To others, he is a breath of fresh air. “Everyone else wears the same thing in Italy. Yes, it’s cut well and worn with style but their imagination and use of colour is non-existent. Vanni blazes through like a comet.”

When opinions are this diverse, it’s hard to call him a style ‘icon’. He’s a ‘renegade’, a ‘maverick’, a ‘dude’; an Italian version of E.Berry Wall. Whereas the rest of Florence look like they belong in a Mastroianni picture, Vanni looks more like he belongs in a comic book. Nothing is off limits, nothing is conventional or predictable. The photoshoots of his collections look like stills from a superhero movie, accessorised by Dick Tracy-yellow fedoras or a pink top hat. Despite the loudness of his clothes, colours in his ensembles are extraordinarily well coordinated, with even the buttons of his waistcoat matching that of his pocket square and tie.

What I like about him is that he manages to look sleek in ensembles that should make him look like he is wearing a Joker costume. Yes, it’s all a bit too much sometimes and I do think that some of the wilder patterns he chooses are unsuitable for suiting, but he still wears it very well. The other thing I like about Vanni is that he is experimental. He’s pouring the contents of one brightly coloured test tube into another – and letting it blow up in his own face. If no one pursued his path, everyone would be iGented and dull, drowning in grey flannel and navy ties. It’s the rule breakers that define new styles, not the conformists.