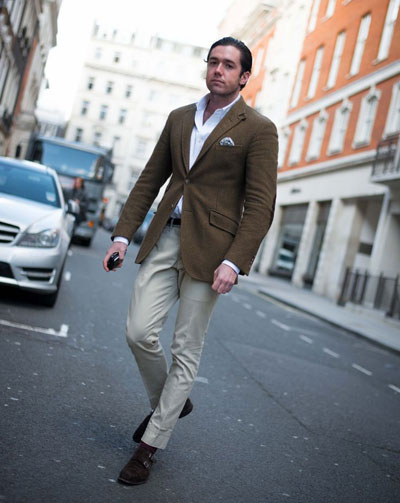 “Pip pip” he would say as he skipped out of his Mayfair club ‘Drones’, tipping his fur felt trilby (probably from Bates) at his bemused chums.

He would advance into the London sunshine wearing a daring chalkstripe flannel suit, undoubtedly from a Savile Row tailor, a foulard silk necktie bought in the Burlington Arcade would adorn a fashionable bar-collar, and the merest hint of a cream silk puff would poke from his chest pocket.

Turned-up trousers would flop onto dark brown, hand-made English Oxfords. And, after a charming word and an extravagant tip to a passing flower girl, a fresh rose or carnation would adorn his lapel.

The year is 1924. Bertram (Bertie) Wilberforce Wooster is in his mid-twenties. A privileged, pleasure-seeking clubman.

This is the Bertie that everyone knows. From today’s vantage point he seems, aside from the charmingly aimless existence and complete avoidance of seriousness, to be the picture of elegance, tradition and maturity. This is the way aged peers dress in the House of Lords. This is the inter-war aesthetic so beloved by The Chap magazine. This is the commonly-called ‘classic menswear.’

And yet, Bertie was really at the height of fashion.

In fact, some of the gentlemen who were still wearing black and grey Victorian and Edwardian frock coats, striped trousers and top hats would have thought him something of a rebel. Some of the more traditional members of London’s clubland, those from White’s or Brook’s, might even have considered him inappropriately attired – the equivalent of wearing a black necktie to a black tie event.

However, it is clear that it is the influence of his invaluable valet Jeeves that prevents Bertie from ever being considered ‘badly’ dressed. Ensuring Bertie is correctly attired is a daily task; clothes must be kept clean, pressed and mended at all times. Also, Jeeves often has to battle with his employer over items that only Bertie considers to be of value; white mess jackets, alpine trilby hats and extravagant plus-six golfing trousers.

But this is the harmless, cloud-cushioned world of Wodehouse, and so clothing is bound to be amongst the more serious matters.

The question is, if Bertie were around today, how would he dress?

One valid argument would point to his youth and state that Bertie’s conformity is only ever to his class and his age group. Therefore, the attire of the male Sloane Ranger is likely to be the major influence on his wardrobe. It’s a hideous thought, but it’s perfectly possible that were a 24 year old Bertie around today he would wear Sebago deck shoes with Abercrombie & Fitch chinos, an Oxford cloth Ralph Lauren shirt and a Moncler gilet.

However, some might say it would be unlikely that Jeeves – who is far more of a snob and a conformist than Bertie – would stand for such disregard of standards of elegance. We mustn’t forget it is Jeeves who maintains Bertie’s sartorial principles and removes unnecessary experimentation from his employer’s reach.

Therefore, some would suggest that Bertie may not dress that differently to the way in which he dresses in the books’ original setting. Jeeves, scrolling through the pages of Styleforum and The Rake, may see that the menswear of the 1920s-30s has, by and large, remained the ideal and is the clothing of taste for the gentleman about London. And, rather than let Bertie be influenced by the recklessness of current fashion or corrupted by his friends’ poor taste, he may cocoon him in an aesthetic closer to that of a city gent; pinstripes, waistcoats and double-breasted suits.

My own thoughts are that Bertie’s social conformity would play a great role. Yes, Jeeves would prevent him from becoming a hoody-wearing Mockney Old Etonian whose style icons are Stanford-educated tech billionaires, but I think that he would stop short of being preserved in a former era, no matter how evergreen the aesthetic. Modernity was evidently fascinating to Bertie. He lived in a fashionable area, in a fashionably decorated – and very modern – flat.

My own views are that he would wear a blend of English and European styles that would ape the prevailing aesthetic in both high-fashion and avant-garde tailoring. He would never embarrass himself in dress – he is too high-born for that – so would always be a subtle version of a trend. He might shop in Massimo Dutti, Paul Smith and Berluti.

He would, unfortunately, probably lose his taste for neckties, instead wearing elegant open shirts with soft-shouldered cord jackets, woven blazers and soft flannel and moleskin trousers. Both he and Jeeves would seek to mark him out as a man of leisure, albeit a smart one, by avoiding suits. His daily attire would appear as something an elegant hedge-fund manager might wear on the weekend. Plain and possibly tasseled brown and black loafers would be on his feet. He might wear cashmere from Loro Piana at home. His pocket watch would be replaced by a Panerai.

Home for modern Bertie is unlikely to be Berkeley Square. He is most likely to settle in Chelsea, where his old school and university friends might be. Although, with many of them not as wealthy as he, Battersea might be more realistic. A modern pied a terre overlooking the river, packed with technology and expensive, modern furniture.

Bertie’s club ‘Drones’ would not be of the Pall Mall type. It would likely be similar to the Dover Street Arts Club, although less commercial. The ranks of tweedy, English public school members in their 20s and 30s will have been reduced greatly, replaced by scions of Russian oligarchs and Saudi princes wearing Tom Ford.

However, there is one very likely consistency: Bertie’s avoidance of matrimony would remain true. And even the modern Drones would be unlikely to admit female members.