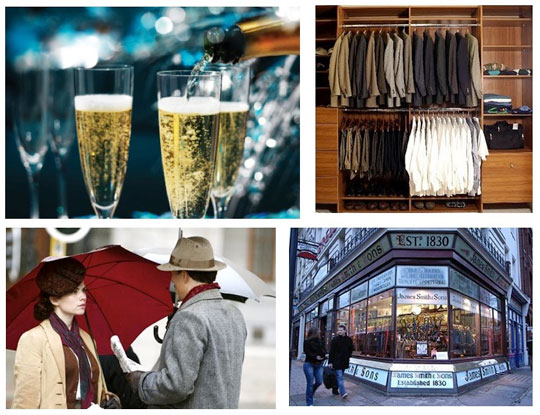 They don’t have the best reputation but, contrary to popular belief, New Year resolutions aren’t there to be broken. They are the thoughts of an organised mind, the intentions of our better selves.

I recently set myself some sartorial resolutions that I mean to use as goals for the next 12 months. I hope to abide by at least two of them.

Oh it wasn’t fair. There was Rufus Sewell, with a pencil moustache, late 1930s tailoring and a magnificently proportioned trilby that neither drowned nor fattened his face. The brim snapped down rakishly, the band and bow beautifully thin. It looked both substantial and lightweight, luxurious and useful. It was a marvellous hat. The sort of hat that wardrobe departments spend a fortnight searching for and then parade in front of the cast to approving applause. The sad thing is, it made me realise the inferiority of my own trilbies. I resolved immediately to avail myself of the services of Messrs Bates or Lock.

My dear old metal-shaft, whangee handled brolly has seen better days. Since it was purchased seven years ago, it has received a battering. Not just from the elements, but from extended and often overly exuberant use. “I’m amazed you haven’t lost it” say some “I’m surprised it hasn’t broken” say others, but then this is the test of a proper umbrella; costly enough not to forget that you own it and strong enough to withstand rough use. The shaft is bent. The end, which got stuck in a drain grate over four years ago, is dented and misshapen and the canopy is thinning and flimsy. Still, at £15 it represents a fantastic investment. Most friends I know who purchased throw-in-the-bag mini-umbrellas have had to replace them several times in the last couple of years through loss or damage. A visit to James Smith & Sons is on the cards.

My wardrobe and shoe collection is a glorious mess. They represent the unhealthy congestion of a West End club on a Saturday night; as soon as one item goes out, another item goes in. Each garment, each shoe, wedged between two others, cries out for space. The sad thing is, more space is quite impossible. Uncluttering is a rather empty resolution as I make it every year, but this year, with the additions I am planning, wardrobe management is not only desirable but also vital. I have finally reached the point of change. The easiest way to administer this change is to order the items by use and then split the collection at the item you would be most reluctant to lose. The key: Be ruthless.