Notes On A Meeting 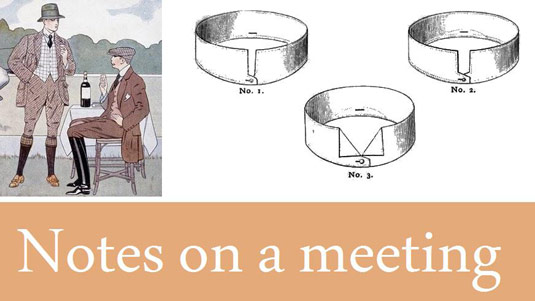 I had an interesting discussion with a friend recently about ‘correct footwear.’ The occasion was my brother’s recent wedding, we had changed into black tie for the evening after the wedding breakfast and he had noticed I was wearing opera pumps with what is technically ‘informal evening wear’ – ‘formal evening wear’ being white tie and tails. He had expected patent Oxfords, which I do own, and asked me why I did not conform to the age old dress-codes; “Surely, opera pumps” he observed  “are only worn with white tie?”

In the grand surroundings – amongst the gilt, marble and giant crystal chandeliers – the encounter reminded me instantly of the character of Larry Lefferts in Edith Wharton’s Age of Innocence;

“As a young admirer had once said of him: ‘If anybody can tell a fellow just when to wear a black tie with evening clothes and when not to, it’s Larry Lefferts.’ And on the question of pumps versus patent-leather “Oxfords” his authority had never been disputed.”

The connection was not an irrelevance; the particular antiquity and social position of this character was crucial to my riposte. A great deal has changed since the Gilded Age – some for the good, some for the worse – and the ‘dos and don’ts’ of Larry Lefferts and his ilk are but the echo of the last waltz: billionaires now wear trainers and jeans and care little for the costume-perfections of a society aping the grandeur and propriety of royalty and aristocracy. The tightrope of ‘high society’ was dismantled long ago.

Consider also PG Wodehouse’s eponymous hero, Bertie Wooster, a character who inhabits a world of relative fantasy – without the nettles of pain, hatred or betrayal – and yet one drawn from characters that the author had known as boulevardiers of the metropolis; the laissez-faire, silver-spooned ‘bright young things.’ Bertie’s social existence lacks credibility in the modern world; gentlemen’s club by day, parties by night, enormous country houses for the weekend.

And yet this was the life of many a wealthy lounge-lizard of the era. A never-ending carousel of fumbling drunkenly out of tailored tails into tailored tweed for visits to country cousins; social distinction required adherence to such dress codes. To act otherwise was to occasion shock amongst hosts. By contrast, wearing tweed and brogues to a friend’s country house today is considered ‘cute.’

The ‘correctness’ of dress is not based on an Act of Parliament but on the codes and fashions dictated by a social class. I personally follow most of these rules because I agree with them aesthetically – tweed in the countryside makes sense, it isn’t ‘just’ a rule – but some rules I defy because I don’t see the sense in being guided by them. I picked the pumps on a whim, which is how I like to choose things. Avoiding them because my tie was black and because my jacket hem did not descend lower than my thigh seems ludicrous. I am no parvenu seeking approval of superiors; doors will not be closed to me because of incorrect dress. I vow to always maintain standards but those of my own, not those of others.