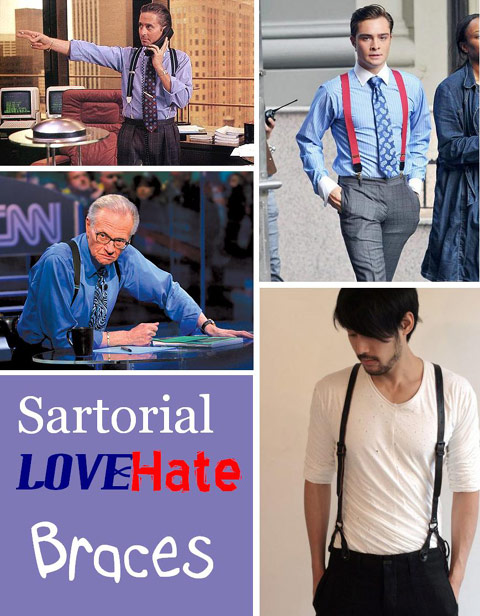 An elderly acquaintance of mine once commented on my use of a belt with my suit trousers. “Do you need that thing there or is it for show?” I gave him a rather awkward, sideways look; “No” I said “I need it. It’s not just for show.” He leaned over, smiled insidiously, opened his jacket and fingered a pair of natty braces; “You need to get yourself a pair of these, young man.”

That was many moons ago, when I was still attempting to attract young women with my clothing; braces didn’t fit into that formula. It was one thing to be smart, another thing to be a square. Braces seemed defunct and old fashioned. I had long hair, headphones and a fake ID. They were simply not for me.

My conviction on this however lasted less than a year. Before my next formal function, I had drifted into a small, rather dusty men’s retailer in search of a pair of Albert Thurston braces. To my disappointment, they did not stock Mr Thurston’s products but they did produce a satisfactory pair by Hunt & Holditch.

Many pairs of braces are sold with detachable ‘clips’ as well as the leather loops; the former grip the top of the trousers, the latter secure themselves to buttons attached on the inside of the trouser waist. I quickly learned of the ‘bespokist’ snobbery about the clips – the point is that if you used clips, your trousers were not made for braces. Therefore, your trousers are evidently ‘cheap’ and ‘off-the-rack.’ This attitude never made much sense to me as it seemed the simplest thing in the world to attach some buttons to one’s trousers to avoid the sniggering disapproval of elitist onlookers.

As I grow older, and into my suits, elegance is by far the most important consideration; whether a passing female likes what I wear is of little consequence. I still wear belts with suits but I am growing more and more fond of braces. Firstly, they hold the trousers in the correct position without pinching or scrunching the trousers to do so. Secondly, while I can see the benefit in ‘dividing’ certain ensembles, as a belt surely does, some suits require continuity which braces provide.

One of the most often quoted inspiration points for braces is Michael Douglas as Gordon Gekko in Wall Street, who wandered around his vast carpeted office, shouting expletives in rolled-up sleeves and a pair of Thurston’s finest; ironic, considering that braces are meant to be concealed beneath a waistcoat or jacket. Because of this connotation, many people still consider them to be an accessory of the now reviled banking classes, despite an attempted hijacking by the transiently trendy Shoreditch skinny-jean mafia.

Fuddy duddy or fabulous? Trendy or trashy? The point is, braces have as many detractors as supporters; another case of sartorial love/hate.