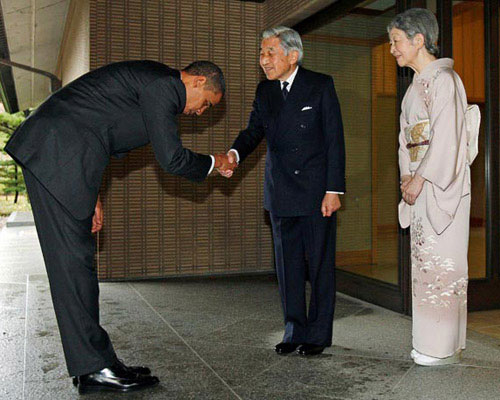 Emperor Akihito is the 125th Emperor of Japan. His ancient line have, according to legendary manuscripts, been on the Chrysanthemum Throne since 660BC, making the Japanese imperial family the oldest rulers in the world. And, like most of the other monarchs in the 21st century world, his role is now largely ceremonial. Though his ancestors would have led giant armies into battle, his duties are confined to that of grand ambassadorship; hosting foreign dignitaries and acting as the figurehead of his nation.

As “the symbol of the state and of the unity of the people”, the Emperor is the cultural guardian of Japan and the highest authority of the national Shinto religion. However, as a man, the Emperor is somewhat diminutive. Prince Charles, who is himself below the average height of a man of his age, practically towers over Akihito. However, this is where any feeling of superiority on Charles’ part must end. Not only does the pedigree of the Emperor’s Imperial family make the Windsors look like reality TV celebrities, Akihito also provides a fierce challenge to the Prince of Wales for the unofficial-but-extraordinarily-important title of ‘best dressed royal.’

In fact, I would go so far as to say that Charles is practically the only ‘world leader’ left who can walk side by side with Akihito and not suffer sartorial embarrassment.

Like the Prince of Wales, Akihito’s weapon of choice is the bespoke double-breasted suit. However, unlike Charles, the brilliance of his elegance is simplicity. Whereas Charles adorns his person with striped ties and shirts, patterned pocket squares and buttonholes, Akihito keeps embellishment to a minimum. Ties are plain or very subtly patterned, pocket squares are rarely anything other than plain white and I don’t think he has ever been seen with a flower in his lapel.

Normally, ensembles of such plainness do not attract my attention. I prefer maximalism and mixtures of colours and patterns. However, in the case of the Emperor, the overall effect is so exquisite and so individual, that I simply have to applaud the beauty of it.

Befitting an Emperor, the cut of his suits is magnificent. His jackets are never too big, nor too tight, and they are perfectly in proportion with his tiny physique. However, it is his trousers that define his style. There is no one who wears trousers like His Imperial Majesty. Completely and utterly breakless, they drape over rather than onto his shoes, leaving but a fraction of a toe poking out. Although the probable reason for this cut is that they were made in an era when wider, fuller trousers were in fashion – read: the 1970s – they look astonishingly appropriate for the ‘little Emperor.’