Sartorial Love/Hate: The T-Shirt And Scarf 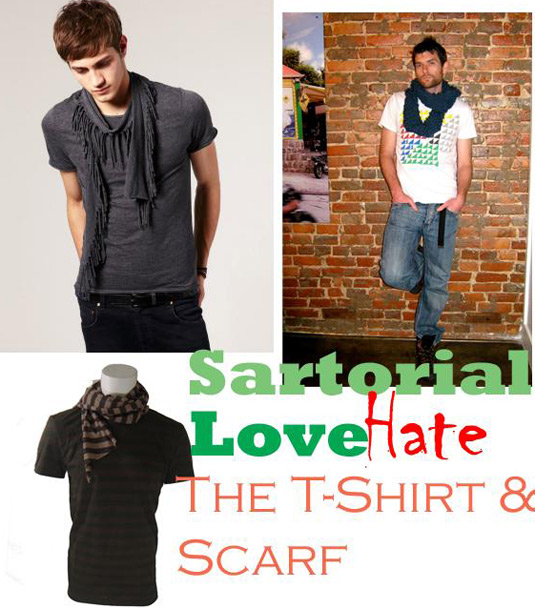 One of the favourite pastimes of the English is to mock those we consider, euphemistically speaking, ‘inappropriately attired.’ This ranges from light taunting and regional stereotyping to harsher critiques about upbringing and class; though it is all perceived to be harmless – considering the superficiality of dress – the latter provokes tension and discomfort and can sometimes be unfairly discriminatory.

The former type, thankfully, is more of a widely accepted and much-smiled-upon national sport. A classic example is that of Englishmen from the (generally colder) north chuckling with derision at ‘southern softies’ in their October overcoats; the ‘softies’ respond in kind, ridiculing their goosepimpled, t-shirted accusers.

Despite this divide, I am convinced some of the, supposedly desirable, ‘northern hardness’ has worn off on the softies of the south, albeit in a peculiar and paradoxical way; in the freeze of November, December and January – when I could be found stamping my feet on the Strand, trussed up in an overcoat, scarf, gloves and usually a felt hat – a few of these contradictory examples would pass wearing a pair of trousers, shoes, a deep V t-shirt and a chunky scarf.

No overcoat, no jacket, not even a cardigan. Their hands, rigid with cold, were plunged deep in their trouser pockets and they walked in that fast-paced manner that attempts to convey a lack of urgency, much like that of a Hitchcockian criminal wishing to flee the scene without blowing cover. They were clearly uncomfortable, and yet the weather was no mystery; it had been cold for some time and these gentlemen were not Twistian scamps unable to scratch together the required cobble for a covert coat.

Their necks were warmly ensconced but their arms were exposed. It was bizarre and yet when I relayed the story to a fashion-forward acquaintance, he simply remarked that he wished he had the arms to ‘pull if off.’ It was another case of sartorial love/hate.

Logically, the combination is ludicrous. A scarf is no replacement for an overcoat. The chaps may have been challenged by the prospect of leaving their coats in the cloakrooms of the night’s venues; after all, a sweaty dancefloor with sticky drinks is no place for a Chesterfield coat. The problem with that is that it is no place for a chunky scarf either.

Aesthetically it looks strange because it is always illogical; why would a big, buff hard man not need a coat but need a scarf for his precious neck? I can understand his desire to show off the results of hard work in the gym but the overall image is not of a gruff hard man who can take whatever the elements throw at him but simply a muscled metrosexual who needs the same creature comforts as the rest of us.