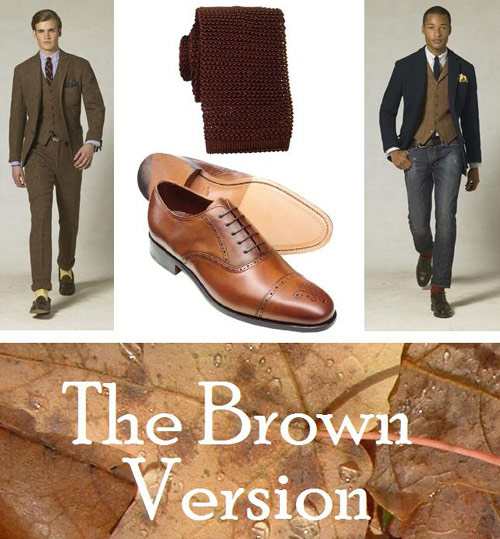 Connecting the colour brown with autumn is hardly a eureka moment. It’s about as imaginative as connecting a blue beret and a baguette with a Frenchman. And yet, as mundane as it seems, few adopt very much at all in autumnal dress. As the falling leaves drift by the window, it’s incredible how few are inspired by the magnificent array of tones of the season. You might see the odd pair of brown shoes, but these are no more prevalent than at other times of year. Gentlemen are much more likely to favour the metropolitan blues and greys over the earthy tones which, while respectful of time-honoured codes of dressing, lacks a little invention.

Adding a brown waistcoat to a blue or dark grey suit adds a warmth and richness. As an autumnal expression, it is but a trifle although it is relatively uncommon as odd waistcoats are considered slightly outré, a little too ‘regardez-moi’ for some gentlemen. Wool flannel is an ideal fabric for such a waistcoat, although knitted wool would offer a flattering, more casual contrast.

Brown ties are a little more common than brown waistcoats although by no means are they considered a classic staple of a gentleman’s wardrobe, whatever the month. I love the contrast a brown tie gives to pink or blue shirt which when paired with a navy suit and a pair of chestnut punchcap Oxfords is a subtle nod to the season.

Brown shoes are by far the most common expression of the colour in menswear. Over the years, I have grown to greatly prefer the brown shoe over the black, despite spending most of my life in the centre of a large metropolis. These days, the ‘brown shoe in the city’ no longer has the stigma of casual inappropriateness and so a man can wear brown with confidence. They create a delicious and discreet contrast with grey flannel and blue suits.

If none of the above sates your appetite for the brown-season, you might want to go the whole hog with a brown suit. Despite country connotations that certain online commentators point to as a reason for shunning the brown suit in town, it is not so undeniably bucolic as to look incongruous in a metropolitan cocktail bar, particularly at this time of year. One of my favourite autumnal looks is a brown suit with a sky blue shirt, paisley tie and pale yellow checked pocket square.