This week I was fortunate enough to see a movie that actually allowed style itself to play a crucial part. Most movies are prone to product placement; never so much stylish as verbose projects full of marketable names. However, the film I enjoyed, The Darjeeling Limited, was a film that was prepared to place style on an equal billing with the leading names of Owen Wilson, Adrien Brody and Jason Schwartzmann. 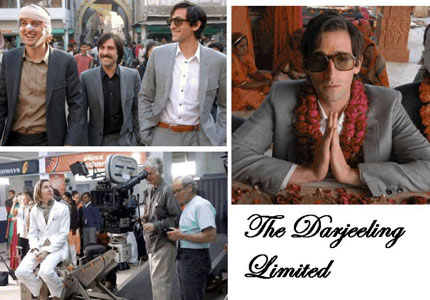 It wasn’t that there was an overload of style; fantastical outfits and utterly artistic camera work weren’t really key components of the film. In fact, the three lead characters wore the same outfits throughout the film. The film’s director and co-writer Wes Anderson is well-known for his tendency to ‘uniform’ his characters. And, bizarrely, though some critics denigrate his efforts on film as superficial, his focus on costume and scenery unhealthy, it is surely far easier to argue that Wes is frugal with his approach. In fact, when it came to it, less was more as far as the movie goer was concerned.

For ideas on clothes for his leading men, Wes turned to friend and designer, Marc Jacobs. Known for his subtly modern takes on classic menswear, Jacobs is one man who has conquered the misconception that modern designers court fashion for the ego boost and the money. Jacobs, while he may be genuinely in love with clothing, is well known for his dislike of fashion. Thus, for a costume designer on a major motion picture, he makes for a wise choice. The leading men wore variations on the grey flannel suit, symbolic of their blood connection as brothers. Their shirts, though of the same cut, were of very different colours which was symbolic of their emotional distance from one another at the beginning of the story.

Carrying off symbolism through costume isn’t a new trick, nor is it particularly difficult, but the effect is appealing. Schwartzmann’s black shirt echoed his dark, rather Don Juan playboy status (he has intercourse with a stewardess in a train toilet), Brody’s crisp white represented his belief that he was the most deserving (married with a child on the way) and the least guilty, and Wilson’s shirt was a dark khaki which represented his position as the balance between the other two brothers; the force that reaffirmed their brotherhood. Symbolism is ubiquitous in Anderson’s movies, and there is no escaping it in this.

The style of the picture is an amalgam of influences. On the one hand you have the delicious cliché of wealthy westerners travelling through India with absurd amounts of luggage, behaving like tourists and ludicrously expectant of miracles when wandering through sacred places. On the other hand you have three sharply dressed men who sit lounging in their compartment, sipping painkillers with a cigarette drooping from their lips. Dressed for the Western metropolis, where their outfits might sink into anonymity, they come to the fore in rural India. In fact parts of the film reminded me of much fashion marketing I have seen; improbably attractive people, improbably dressed in an improbable location. In The Darjeeling Limited, the improbability didn’t matter, and though I am more likely to be seen in India wearing a white suit, club tie and pith helmet, I appreciated Jacobs clothing.

I also appreciated the beautiful Marc Jacobs for Louis Vuitton luggage which was carted around by Brody, Schwartzmann and Wilson as they continued their journey through India. Blissfully monogram free, the luggage (pictured below) was caramel brown in colour (Vuitton likely using their Nomade leather as the base material) and was covered in charming embossed motifs of elephants, giraffe’s, zebras and palm trees. The design for the motifs was not by Jacobs, but Anderson’s brother, Eric, and the effect was truly and unabashedly colonial. Even their father’s initials were printed on the side. There were a great number of items: two or three suitcases, a steamer trunk, a keepall, a reporter satchel and a briefcase, and there were frequent Abbey Road style shots of the procession of brothers with their matching luggage. 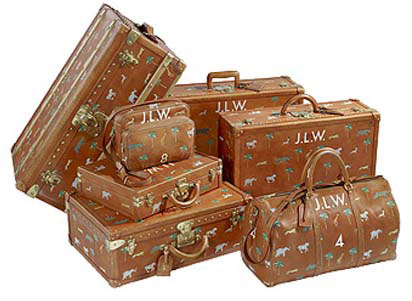 As a style film it doesn’t have the complexity or beauty of The Talented Mr Ripley or the elegance of Breakfast at Tiffany’s, but there is a certain North By Northwest quality to the outfits – that ‘good in all conditions take-me-anywhere’ label to the suits. In terms of the movie’s undeniable charm, style does indeed play a leading role.