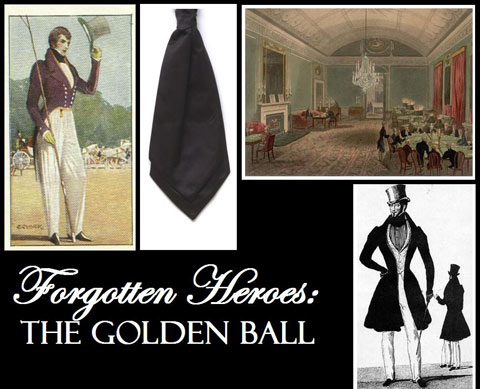 A friend recently told me that they believe there is no better, more flattering combination of shirt and tie for any man than that of black and white; a white shirt, with a black tie. Traditionalists might scoff at the practice of wearing black ties to anything other than a funeral or an evening function; until quite recently, the modern practice and code has been to wear all colours of tie during the day, except black.

Some I have encountered remark that wearing a black tie makes you look like personal security, or a doorman, or a chauffeur: a man in service to another. They are often surprised when I inform them that you can trace back the ‘invention’ of the black tie (or cravat) with the white shirt to a gentleman who represented anything but the image of servitude. A man who lived a life so wildly fantastical that his interesting tale is refuted as Aesopian myth; but he was real and he was indeed credited, and credit was always to be his downfall, with the invention of the black cravat.

Edward Hughes Ball Hughes, known in society as ‘The Golden Ball’ due to his extraordinary wealth, was a friend of the Prince Regent and a noted dandy. He was, in addition to being fabulously rich, a handsome man and, no doubt due to his notoriety as a hedonist and colossal gambler, influential in matters of fashion. Ball Hughes was still at Eton when Beau Brummell was gambling his last farthing at the tables in St James. His spells at Cambridge and in the navy must have been brief; by the age of 19 he had inherited a fortune of £40,000 a year. With such riches, connections to the highest circles will have been expedited.

In the days of the Regency, and indeed the era of George IV, men like Ball Hughes were the Hollywood stars. In the capital of the largest and most influential empire, society concerned itself with sex, scandal, money and fashion; Ball Hughes was one of those at the centre of attention. He bought Oatlands, Henry VIII’s great palace in Surrey, from the Duke of York and spent his honeymoon there with his beautiful new wife, a sixteen year old Spanish danseuse. He would famously be seen, set striding across his newly acquired estate, hunting in his latest creations for fashion; an army of servants carrying guns, wine and food behind him.

However, despite his undoubted influence in fashion, it was for his career as a gamester that he was best known. Gambling at anything from cards to shuttlecock, Ball Hughes dissipated most of his fortune away through his speculations at the tables. He was written letters by concerned friends, fellow members of his clubs, that there were conspirators, vultures; ‘they seek [to] knock down your whole fortune in one night.’ Though he gained little reward but pleasure from his gambling habits, the Oatlands speculation was one of his few triumphs. Much of the land was sold for the development of villas and Ball Hughes was able to live out his remaining few years in the luxury he had enjoyed throughout much of his life.

So for gambling he was known, but for the black cravat he is remembered. His legacy for his heirs had all but disappeared but the most important legacy; the daring to flaunt an alternative style, however conservative that style appears in the modern day, preceded one of the most common practices and combinations of tone available to men today. I often think to myself that I could credit few individuals with the appreciation that they were the reason I do a certain thing, or dress a certain way – largely because if they did exist, they are unknown to me. I relish therefore the opportunity to raise a glass to a single figure in history whose accidental power and influence is the reason I am flattered by monochrome today.