The Politics Of Dress 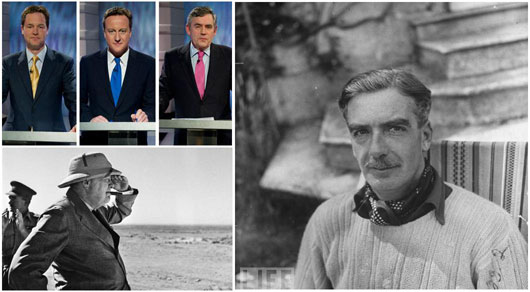 One of the many things for which President Obama has received praise is his dress sense. Sadly, that is not something any of the Prime Ministerial hopefuls in the UK General Election will have to endure.

It seems that in modern British politics there is no place for style, flair, individuality or even quality. The requirement is to dress like a high–street bank manager, as the recent leadership debate highlighted beautifully. Standard issue uniform is a choice of plain midnight blue single breasted worsted wool suit, plain white or blue shirt and one of six shiny coloured ties – red, blue, yellow, green, pink or purple. Nowhere will you see the skilful use of textured cloths or the addition of knitted silk and god forbid a shirt should have a stripe, check or white collar and cuff. Their off duty wardrobes equally leave something to be desired.

In many ways politicians are a reflection of the people they govern. That may mean the majority of the people in the UK dress in a perfunctory and uninspiring way – which isn’t far from the truth. Or perhaps it is a sign of our immaturity that we should distrust men who dress well, or resent them having money to spend on clothes.

Winston Churchill was a patron of Savile Row’s Henry Poole & Sons – as they like to remind us. But should modern Prime Ministerial aspirants flirt with proper tailoring they cannot afford to let the public know they spend £3000 on a suit. Of course if you understand the art and craft that goes into such a suit it seems more reasonable, but most don’t. Indeed, we’re more likely to praise them for their thriftiness.

Historically British Prime Ministers have done reasonably well in the style stakes, with many developing signature looks. The most revered was of course Anthony Eden who is still regarded as one of the World’s best dressed men even today – the Eden Homburg being his legacy. Churchill had a certain Edwardian style; he also had his hats, and a tendency to dress in Forces uniforms. For Liberal Lloyd George it was capes, and Benjamin Disraeli was renowned for his fancy waistcoats which merely added to his exotic persona –perhaps one more reason why each in his own way is a man I admire.