The Question Of Trying 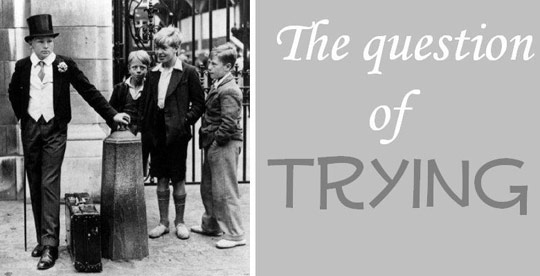 One of the most fascinating accusations levelled at me is that, in my manner of dress, I try far too hard. This has always been a sore point for me but not, as you might expect, because I experience personal wounding from the insult. Rather it is frustratingly perplexing to me that commentators can deliver in the manner of a fait accompli such dissatisfaction with, not a result, but the appearance of effort in attaining that result. Additionally, the pretence of such commentators with regards to their acquaintance with the intimacies of my mental and physical exertions when we do not even maintain the slightest sense of a communicative relationship is absolutely staggering. An aesthetic criticism seems legitimate to me; “Too fussy”, “Too derivative”, “Too bright” – these are opinions based on evidence. “You’re trying WAY too hard” on the other hand is not based on evidence but is simply a speculation.

Firstly, the concept of trying is a relative one. People who are aesthetically inclined and colour-minded may naturally find it easier to throw a few items together and make an outfit. In much the same way that a skilled composer can produce an original and beautiful tune in a matter of minutes, or an artist produce a compelling portrait in under an hour; the result is not always a sign of considerable time-investment. Secondly, it should not be that a sign of trying, phantom or otherwise, is so repugnant to the man in the street. Effort is denigrated too often and too wantonly and has become a dirty word in an increasingly laid-back, barely sentient, dozy excuse for a developed world. Trying is apparently wrong and trying too hard a mortal sin.

My participation in a recent Esquire competition to find Britain’s Best Dressed Real Man exposed me to the opinion of a vast array of forum-trawlers, many of whom exhibited sheer indignation and contempt for any entry that appeared to involve ‘trying.’ What was most interesting was that the most complimentary and the most critical rounded on the same issue; “…You can see what he is trying to do here” vs. “…he is trying waaaaaaay too hard.” Again, the appearance of trying (however disingenuous that effect might be) the subject of chief concern; not colour, not pattern, not the mixture of fabrics.

A friend informed me that any number of entries in the competition would receive such critiques because individuals do not consider themselves ‘qualified’ enough to analyse compositions for their result because they cannot compute the personal effort required on their behalf to simulate the same effect.

This is perhaps rather harsh, and as speculative a charge as that of someone telling me I try too hard, but it does touch upon a deeper sociological topic: ‘trying’, in relation to creativity, is the easiest thing to stigmatise as the results of an aesthetic pursuit are always subjective. It also attacks the integrity of the creator to mark a result as one of industry rather than inspiration. Unless such bitterness is expunged, I expect in ten years or so a gentleman wearing anything more involved than a GAP fleece and a pair of training shoes to be scorned as an, ahem, ‘trying’ individual.