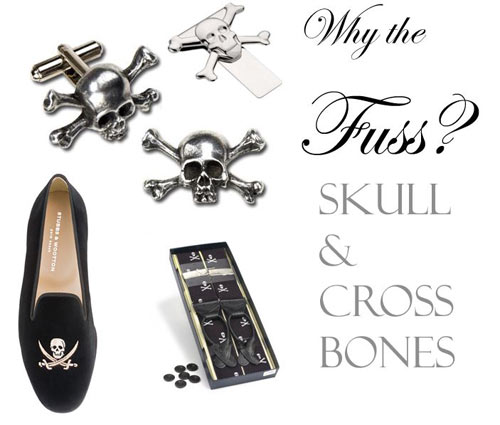 There are little trends which have small, sometimes even humble beginnings. They grow gradually through inventive marketing, product placement and, catalysed by transient cultural association and celebrity endorsement, balloon into blimps that define an era of fashion. Though the process is begun by one, others follow suit very quickly and you have the development of what you might call a ‘we might as well’ trend; Brand X sees Brand Y following the trend, shrugs its shoulders and says; ‘We might as well.’ One of the most notable ‘we might as well’ trends in gentlemen’s attire in the last 5 years has undoubtedly been the inexplicable use of the skull and the skull and crossbone motifs.

“It was McQueen who started it” says one. “No, it was actually Vivienne Westwood” says the other. “You’re both wrong” another chimes in “I think it was Paul Smith.” Whoever gave birth to the idea is not particularly relevant: crackpot creatives have all sorts of odd ideas and parade them gleefully before the world’s press; very few of them end up in the windows of New & Lingwood or in the hushed elegance of Fortnum & Mason. And yet the skull and the skull and crossbones, great symbols of, well, almost anything you choose them to be – rebellion, piracy, mortality – are everywhere. They are on velvet slippers, cufflinks, ties, bow ties, jacket pockets and dressing gowns. They are on silk scarves, braces, tie clips and buttons and, for the life of me, I cannot understand their appeal.

Someone somewhere got the supposedly bright, but not particularly original, idea that gentlemen’s clothing is boring. A fusty, stifling world of antlers, Old School ties, chamber music and, most importantly of all, conformity. It reeked of the establishment and they needed a heavy metal disinfectant. A few clever designers, a Pirate film or two and suddenly, the answer: to bring that harder, grittier edge to the soft, squidgy, fireside world; to turn a man from Hamish Bowles into Jason Statham; that element of graffiti, a tattoo reminder of a ‘hardened’ life of £190 slippers and onyx cufflinks; the skull and crossbones.

The men who wear it wear it with supposed irony. They, like me, grew up being told stories by grandfathers of The Jolly Roger and the desperate evil of pirates. Famously worn on the uniforms of the Schutzstaffel, the Totenkopf is a symbol of death, as mocked on the British comedy show “That Mitchell And Webb Look” when an SS officer on the eastern front suddenly realises what his cap badge is and asks a fellow soldier: “Hans…are we the baddies?”

There will be those who disagree. Some may view the skull and crossbones motif as a design classic and its incorporation into items of gentlemen’s clothing increasingly viewed as feminine and frilly as a masterstroke to entice a generation hardened by hip hop and Guy Ritchie films.

People are often ridiculed for wearing symbols of their network or establishment. School ties, college cufflinks and Masonic tie clips all badge the wearer as a member of that establishment. The fact that they need to flag membership through ownership and display of such trifles is the thing that provokes the ridicule. However, is it not more ridiculous to adorn oneself in symbols that have little aesthetic attraction, no relevance of membership, except perhaps connections to the most notorious and sinister organisations the world has ever known?