How Wide Should My Stripe Be? How Big My Check? 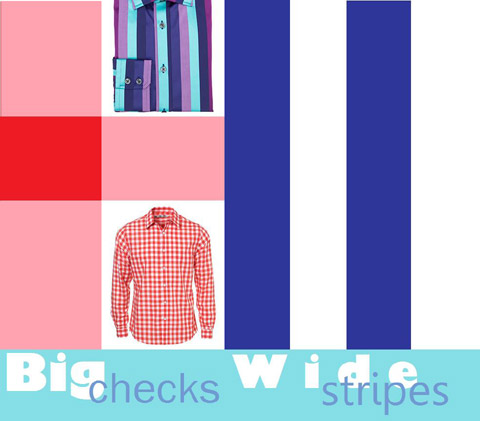 Someone wrote to me recently about their virginal visit to the vaunted stores of Jermyn Street. However, instead of gushing passionately about paradise, breaking down like Mia Farrow and sobbing with euphoric ecstasy about “such beautiful shirts”, this gentleman had wandered around initially unimpressed and eventually left, empty handed and rather disappointed. It was clear to him that far too much fuss had been made of this rather inconsequential little street behind Piccadilly.

One of the problems for this gentleman seemed to be the plethora of ‘modern shirts’; funky striped things worthy of Duchamp and Paul Smith, and the lack of something traditional like a white collared Bengal striped shirt. He also mentioned that he had seen some of the largest stripes and checks he had ever seen in these wooden-walled emporiums; and not simply large, but elephantine. The stripe was apparently so obese that a butcher’s stripe looked like a pinstripe and the checks were so vast in size and small in repeat that the garment, apparently, looked like it had been fashioned from “the world’s largest picnic blanket.”

Naturally, after introducing these Wonders of the Sartorial World, this gentleman then enquired what I thought of them. To be honest, I think that huge checks and huge stripes do have an appeal; a childlike optimism. They do not need to be brightly coloured, nor excessively accessorised, as they are so unusual and striking that their ‘statement’ is loud enough on its own. In actual fact, I think that any accessories, aside from a very plain pocket square poking out of an accompanying jacket, are rather unwelcome – and that includes neckties. With a small checked or striped shirt, a plain necktie looks like the perfect counterweight; with an enormous check or stripe, it starts to look a little clownish. Like Lego.

I think attempting to ‘sober up’ one of these mighty examples of patterning is a mistake though. These shirts are, for want of a better description, ‘fun shirts’; covering them in a sensible suit covers their appeal. The ‘V’ of a suit, no matter how low cut, is actually a small window onto one’s shirt. With microscopic patterns it’s irrelevant but when you cannot even see the pattern repeat it’s a problem. A casual jacket unbuttoned yields more pattern display but ideally, the shirt would be worn without a jacket; to be appreciated in all its glory. Scale up the checks and stripes by all means, but adjust your look accordingly.