Inspiration and influence are not as widely available as an intending-to-be-well-dressed gentleman might think; we might consider that there are countless subjects around us that can add interesting ideas to the world of style. For women, such influence is evident and, more importantly, evidently usable; women’s fashion is very unlike men’s fashion in that regard. Only characters like Galliano step beyond the safe and secure ring of inspiration and influence: for consider how many seasons we have seen a rejuvenation of the Ivy Leaguer? The English country gentleman? The revisit of the smooth Italian? All of these ideas work well, and appeal to a great many men. But the men’s roster of available influences is far shorter than that for women. For it is perfectly possible for a woman to be influenced by the Circus, or the riding stable, and still appear elegant. For gentlemen, there is a danger that they could tread into the ridiculous or remain marooned in the realm of tokenism; too much or too little, or too outrageous an influence, and the gentleman is no longer well dressed.

Influences are welcome, make no mistake. The gentleman who begins to be influenced by ideas and art greater than fashion begins to understand the higher meaning of clothing; that of a form of presentation, intelligence and personality. I’d wager that few visiting this page are of the minimalistic, practical persuasion “they’re just to cover your body” – for the same can be said of a simple hovel to keep you warm. If everyone bemoaned the superfluity of clothing, art, architecture, music and all the grand achievements of humankind, then the world would eventually crumble beneath our feet; all ‘pointless’ and ‘needless’ things that enrich our lives would vanish and our existence would be plain, functional and entirely without dreams. I am thankful that we do not live in such a charmless world; that there are victories and fripperies, splendours and excesses to draw fantasy upon. But what is acceptable for a well-dressed gentleman eager to add charm and fantasy to his ensembles? Baroque piracy? Probably not. 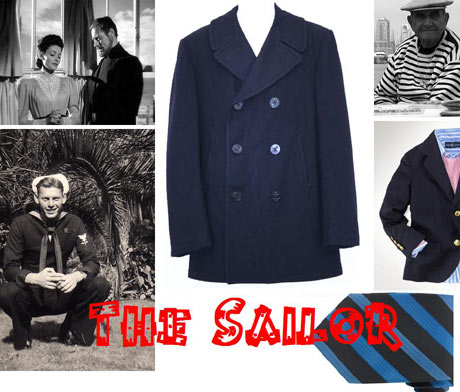 The sailor of yore, with his striped jumpers, red neckerchief, and signature navy blue is a constant influence for gentlemen. A red pocket square on its own might be a little ‘token’, but worn with a strong navy blue suit, or perhaps a double breasted blue blazer, with a navy and white striped tie and white trousers and white shoes, presents a strong, masculine and yet thoughtful image. Think brass buttoned pea coats and the oft forgotten roll or turtle neck. The sea is romantic and rigorous and it is an influence worth exploring further. 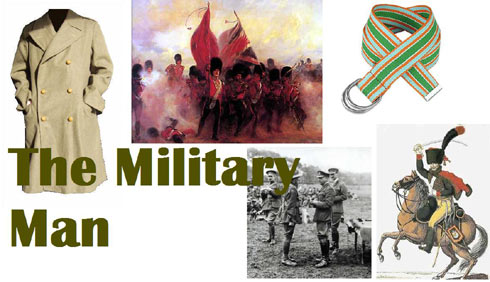 Military uniforms of yore are simply stunning, but they are rather too gilded and overly resplendent for boulevardiers of today; however the lines and styles are worth considering. Stiff overcoats, double breasting, leather belts with brassy buckles. Forest green ties and jumpers in the winter, striped belts in the summer; the symbols of military clothing are everywhere. A real nod to a smart military past might be to wear a green v-neck jumper, a brown leather belt with a shiny brass-looking clasp and some chocolate Chelsea boots; add a double breasted brown overcoat, with smart brass buttons replacing the usual horn or plastic. 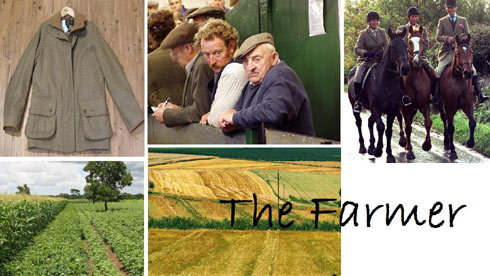 As awkward as he might seem, the farmer offers an alternative look (which is much more a ‘weekend’ look) to the usual smart-veering-on-casual. It’s not just about tweed; think of corduroy, flat caps, hacking jackets and substantial Tricker’s brogues. Embrace small-check shirts (“like a maths workbook” – as a friend once teased me) worn with burgundy ties with country symbols; but avoid Wellington boots in the metropolis (people will wonder where the tractor is parked). Pale and slightly worn denim is a stylish nod to the image of the American farmer and it looks wonderful with brown leather.